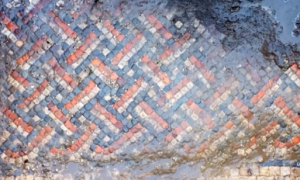 Some rather interesting ancient discoveries have been made in the waters near Caesarea, Israel over the years. However, none in the last few decades is comparable to a recent find made by two amateur underwater explorers, reports The Jerusalem Post.

According to Haaretz, the trove of artifacts they came upon last month hails from the Roman Empire and dates back some 1,600 years. After finding the wealth of objects, the duo alerted the Israeli Antiquities Authority, and the organization sent its own exploratory team.

Significant items uncovered by the group include coins, bronze likenesses of a god and goddess, and figures of animals. As the treasure, which is believed to have been the cargo of a wrecked ship, has spent most of its time buried beneath the sand, it remains in remarkable condition.