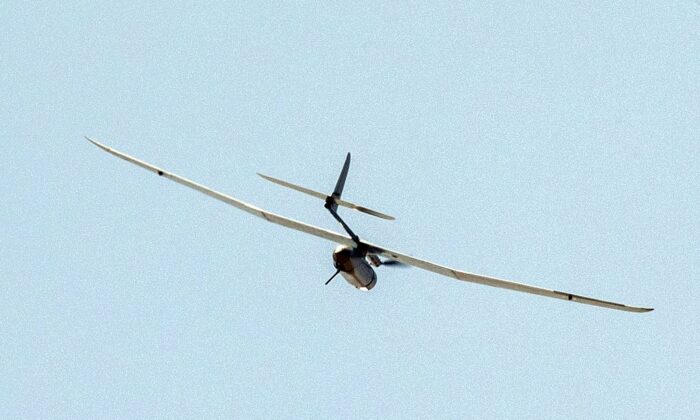 Israeli army's Skylark I unmanned drone aircraft, which is used for monitoring purposes, in launched over an army deployment area near Israel's border with the Gaza Strip on July 14, 2014. (Jack Guez/file/AFP via Getty Images)
Middle East

Israeli Companies to be Indicted for Illegally Exporting Cruise Missiles to China: Report

Ten Israelis and three Israeli companies are set to be indicted for illegally exporting cruise missiles to China, according to reports.

The financial department of  Israel’s state prosecutor’s office gave notice to the suspects that they would be indicted on serious security offenses after it was found that they exported cruise missiles to China without a permit, The Times of Israel reported.

Israeli drone entrepreneur Ephraim Menashe, founder of the Solar Sky company which manufactures cruise missiles, is accused of brokering a deal with China.

Menashe allegedly hired Tzvika and Ziv Naveh, the owners of a drone company called Innocon, among other unnamed suspects who are accused of producing cruise missiles and their relevant parts. Innocon, established in 2001, develops UAVs for intelligence purposes.

The deal was allegedly mediated by Zion Gazit and Uri Shachar, the owners of a security consulting company, which specializes in consulting between Israeli tech companies and foreign investors.

“The suspects were investigated as part of a large-scale security case in which it was suspected that they manufactured, brokered, and exported cruise missiles for military use, without a permit,” prosecutors said.

The dozens of cruise missiles were exported illegally to China and Menashe received millions of dollars in payment, which he subsequently hid from prosecutors as part of his connections with a foreign company, prosecutors allege, according to The Jerusalem Post.

Menashe and the other suspects “manufactured dozens of cruise missiles and carried out different tests in Israeli territory, endangering people’s lives,” prosecutors said.

The suspects are expected to face charges, including security offenses, weapons offenses, violating the Defense Export Control Law and the Anti Money Laundering Law, among others, and will be summoned to a pre-indictment hearing.

The cruise missiles were not used by the Chinese military, the Post reported, noting that the case is being probed by the Unit of International Crime Investigations in Lahav 433 organization of the Israel Police.

According to WION, Beijing has not commented on the transaction with Israel for cruise missiles.

Menashe was previously investigated in 2006 for attempting to export drones to China without a permit, and the technology involved in the cruise missiles adopt a more advanced version of the technology used in those drones, according to The Times of Israel.