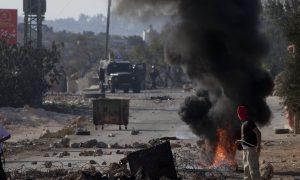 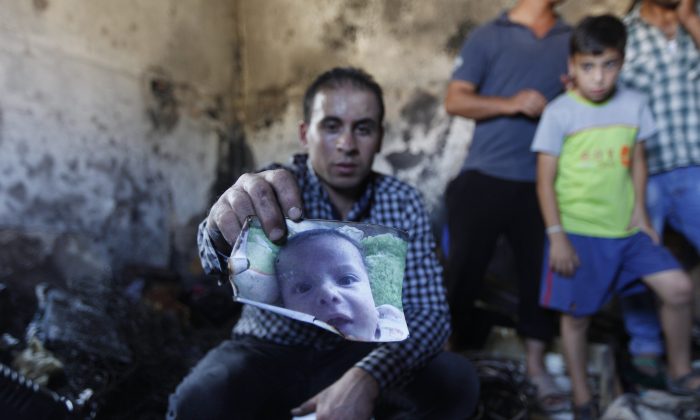 A relative holds up a photo of a one-and-a-half year old boy, Ali Dawabsheh, in a house that had been torched in a suspected attack by Jewish settlers in Duma village near the West Bank city of Nablus, Friday, July 31, 2015. (AP Photo/Majdi Mohammed)
Middle East

JERUSALEM—Israel said Tuesday it was interrogating the suspected head of a Jewish extremist group in the first arrest of an Israeli suspect following last week’s arson attack in the West Bank that killed a Palestinian toddler and wounded his brother and parents.

According to the Shin Bet security agency, 23-year-old Meir Ettinger was arrested late Monday for “involvement in an extremist Jewish organization.”

The agency would not say if he is also suspected in the July 31 arson attack, but it has accused Ettinger of heading an extremist movement seeking to bring about religious “redemption” through attacks on Christian sites and Palestinian homes.

Israeli Prime Minister Benjamin Netanyahu has pledged “zero tolerance” for Jewish terrorism following a pair of deadly attacks by extremists. The Palestinians toddler was burned to death a day after an anti-gay ultra-Orthodox man stabbed a 16-year-old Jewish girl during a rampage against marchers at Jerusalem’s gay pride parade. The teenage girl later died.

Authorities are now expected to crack down much harder on suspected Jewish extremist cells, particularly among West Bank settler youths.

Israeli media have dubbed Ettinger as the Shin Bet’s “number one” most wanted Jewish extremist. He has been arrested several times before and banned from the West Bank. Ettinger is also the grandson of the late Rabbi Meir Kahane, an ultranationalist whose party was banned from Israel’s parliament for its racist views in 1988. Kahane was killed by an Arab gunman in 1990.

Ettinger has denied leading an extremist movement. His lawyer, Yuval Zemer, told Israel’s Army Radio that authorities arrested his client to appease an Israeli public outraged by the arson attack.

“There was no urgent need to arrest here, other than some kind of desire to show, ‘Here, we’re doing something, here, we’re arresting,'” said Zemer. “Of course, what is better than the number one most wanted target?”

The arrest comes on the heels of a violent spate of attacks in Israel and the Palestinian territories that threatened to ignite widespread violence in the region.

The Shin Bet would not say whether Ettinger had anything to do with the attack on the West Bank home, which killed 18-month-old Ali Dawabsheh and severely injured his parents and 4-year-old brother.

However, the agency singled out Ettinger two days before the attack, when it announced it had uncovered a Jewish extremist movement of young settler activists responsible for a June arson attack of the Church of the Multiplication of the Loaves and Fish, a prominent Catholic church near the Sea of Galilee, and a number of other hate crimes. The Shin Bet at the time accused Ettinger of heading the movement.

Authorities said last week they have filed indictments against two other young Israeli extremists and arrested three others in connection with the church arson attack. The Shin Bet said Ettinger’s group vandalized a number of Christian religious sites in the past two years, tried to disrupt Pope Benedict XVI’s 2014 visit to the Holy Land, and committed “more significant terrorist attacks of arson” against Palestinian homes in the West Bank over the past year.

A month before the attack on the church, Ettinger called on his blog for more attacks on Christian religious sites. He had lived in recent months in unauthorized Jewish settlement encampments in the West Bank set up by the “hilltop youth,” the Shin Bet said, using a term referring to radicalized Jewish teen squatters on West Bank hilltops who have been known to attack Palestinians and their property.

Six months ago, authorities signed a year-long order preventing Ettinger from entering Jerusalem and the West Bank settlements, saying he posed a danger there. He moved to the northern city of Tzfat, a hub for Jewish religious mystics.

In a blog post, Ettinger denied the Shin Bet’s accusation that he leads an extremist organization.

“There is no terror organization, but there are many, many Jews, many more than people think, whose value system is completely different than that of the Israeli Supreme Court or the Shin Bet,” he wrote in a July 30 blog post. “The laws they are bound by are not the State’s laws … but laws that are much more eternal and real.”

Also Tuesday, Israeli security forces demolished a Jewish settlement house in an outpost of the Eli settlement that had been built illegally on private Palestinian land in the West Bank. COGAT, the defense body that handles civilian issues with the Palestinians, said the demolition was coordinated with the settlers and there were no protests.

Last week, settlers clashed with Israeli troops as Israeli bulldozers demolished a contested housing complex in another Jewish settlement in the West Bank.