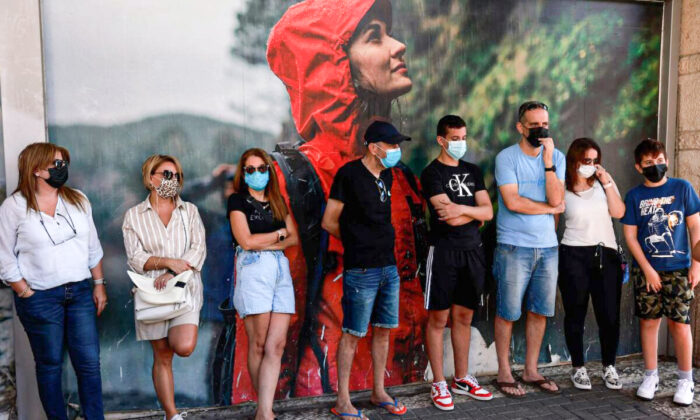 Israelis wear face masks as a means of protection against the coronavirus, in central Jerusalem on Aug. 19, 2021. (Menahem Kahana/AFP via Getty Images)
WORLD

A day after Israel announced a COVID-19 Green Pass would be required to visit shopping centers, the Ministry of Health backed down on some of the contentious requirements originally set out.

Prime Minister Naftali Bennett and Health Minister Nitzan Horowitz decided on Tuesday that the new regulations would be put in place after 22 new cases of Omicron were identified in Israel, bringing the total number of cases of the new variant in the country to 89, The Times of Israel reports.

On Sunday, officials confirmed 67 cases of Omicron have been detected in Israel but noted that there was a “high probability that there are 80 additional cases of exposure to the Omicron variant, who are still waiting for their genetic sequencing results.”

Under the regulations proposed on Tuesday, individuals entering shopping malls would have been required to show their Green Pass to security guards, who would have then provided them with a bracelet granting them entry into the facility for the day, so long as they met the requirement of being fully vaccinated, recently recovering from the disease, or presenting a negative test result, as per The Times.

Individuals who do not have a Green Pass would have been allowed to enter shopping malls, but only to use essential services, such as pharmacies—although health officials and the attorney general didn’t specify what constitutes an essential service.

The new Green Pass rules would have applied to closed commercial spaces of more than 10,000 square meters (107,000 square feet), The Jerusalem Post reports. Business owners argued that businesses inside malls would be significantly harmed by the proposed rules as customers would go to shops on the streets instead.

Store owners said they would not comply with the proposed rules and planned to petition the High Court of Justice against them, as per The Times.

“We will not label customers. If the state of Israel wants us to stand at the entrance to the mall, it should send police. Mall employees won’t make this differentiation,” shop owners were quoted as saying.

Israel’s Strategic Affairs Minister Eli Avidar on Twitter called the move “a hasty step” that could have a negative impact on businesses.

“This is a hasty move without any epidemiological logic nor connection to reality. This is a blow to business owners and a blow to citizens,” he tweeted. “The democratic public is losing the trust it still has left, and blames those who lend a hand to this madness.”

Vaccinated individuals returning from “red” countries with high case rates will now be allowed to quarantine at home for a week as opposed to having to stay in a state-run isolation facility, so long as they can provide a negative PCR test result. They will also need to present a negative COVID-19 test result to leave quarantine.

Non-vaccinated individuals who do not present proof of immunity will be required to stay in a state-run isolation facility unless they take a COVID-19 test when arriving at the airport and the results are negative.

The newly-updated travel rules are also set to take effect on Friday.