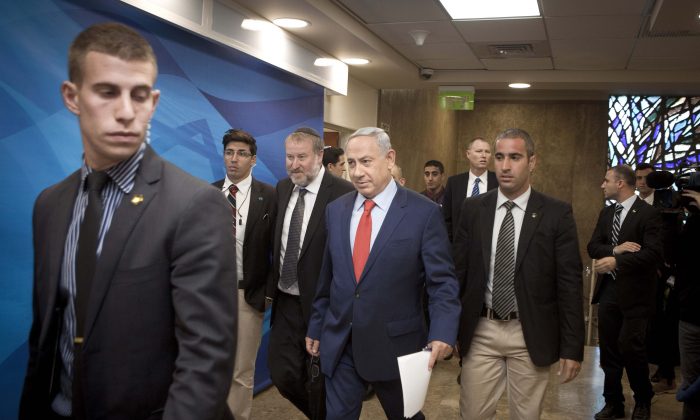 Israel Suspends Contact With Some EU Groups Over Labeling

The decision, which deepened a fissure with the EU over the labeling issue, came as a rash of Palestinian attacks showed no signs of relenting. In Sunday’s violence, Palestinians carried out two new stabbing attacks—wounding a woman and a police officer. One of the assailants was shot dead.

Israel has been up in arms since the EU announced this month that goods produced in Israeli settlements must have special labels and cannot say they were made in Israel. Israel has said the decision is discriminatory and unfairly singles out Israel, while the EU says it is a technical matter to clarify the origins of the products.

The peace process with the Palestinians broke down early last year, so the practical implications of the announcement were not immediately clear. The Israeli statement did not say which institutions are affected, and an EU official would only say the bloc was still trying to determine the effect of the move. He spoke on condition of anonymity because he was not authorized to discuss the matter with the media.

Immediately after the EU’s decision on Nov. 11, Israel also said it would suspend dialogue on certain bilateral political issues.

Israel captured the West Bank and east Jerusalem in the 1967 Mideast war from Jordan and began building settlements soon after. The Palestinians claim both territories as parts of a future state, a position that has global support.

Israel has linked the EU move to a growing international boycott movement, and some officials have accused the EU of anti-Semitism.

The EU says it opposes boycotts, and says its move is a matter of consumer protection. Settlement products, including agricultural goods, olive oil, cosmetics and wines, make up a tiny percentage of Israeli exports to Europe.

The EU labeling move has come during a two-month spate of Palestinian attacks that shows no signs of ending. In the latest bloodshed, Israeli police reported a pair of stabbings Sunday.

In one instance, a 38-year-old Palestinian man yelled “God is greatest” before stabbing an Israeli policeman at Jerusalem’s Old City, moderately wounding him before officers shot and killed him.

Hours later, a Palestinian stabbed a woman in the back as she waited at a Jerusalem bus stop. The woman, a foreign national identified by media as Nepalese, was evacuated to a hospital. Police later said they found the attacker—a teenage boy—hiding at a nearby construction site.

The violence erupted in mid-September over tensions at a Jerusalem holy site. Since then, 19 Israelis have been killed in Palestinian attacks, mostly stabbings and shootings. At least 97 Palestinians have been killed, including 62 said by Israel to be attackers. The others died in clashes with Israeli forces.

Israel says the violence stems from Palestinian incitement and incendiary videos that encourage bloodshed on social media. Most of the attackers have been young Palestinians in their teens and early 20s. The Palestinians say the violence is rooted in frustration over a lack of hope for obtaining independence.