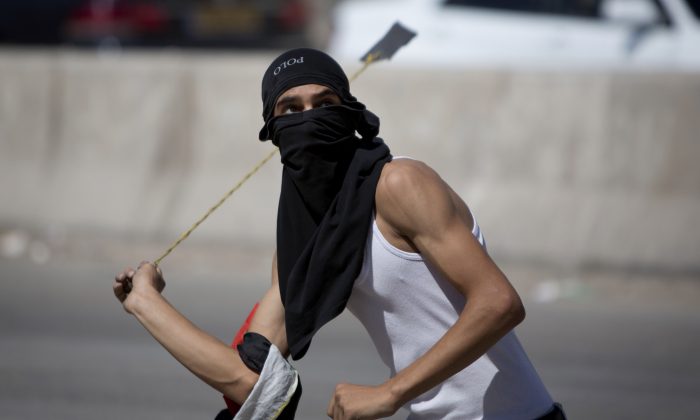 In this Friday, Sept. 18, 2015 file photo, a Palestinian uses a sling shot with stones during clashes with Israeli troops at Qalandia checkpoint between Jerusalem and the West Bank city of Ramallah. Israel is struggling with the resurgence of a weapon dating back to David and Goliath: the hurled rock. (AP Photo/Majdi Mohammed)
Middle East

JERUSALEM—After finding high-tech solutions to halt suicide bombings and rockets, tech-savvy Israel is struggling with the resurgence of a weapon dating back to David and Goliath: the hurled rock.

Rock throwing is becoming commonplace in Jerusalem amid a wave of Palestinian unrest, leading to calls for a harsh crackdown and adding to tensions over access to a key holy site. But the outbursts appear to be decentralized and unorganized, and any tough new measures risk setting off another full-fledged conflict.

The Palestinian rock thrower emerged as an iconic image of the first uprising against Israeli occupation in the 1980s and even as the second uprising last decade took on a more militant nature with suicide bombings and shooting attacks, rock throwing has been a regular feature of demonstrations since then. But in recent months, stone throwing has become a near daily occurrence in some neighborhoods of east Jerusalem, the section of the city captured by Israel in the 1967 Mideast war and claimed by the Palestinians as their capital.

After an Israeli motorist was killed when his car crashed after being pelted with stones on the eve of the Jewish New Year, the Israeli government pledged to crack down.

Israel quickly built a new fence and installed greater surveillance measures at the site of the attack, and the government has pushed for more lenient rules of engagement for police. It is also promising tougher minimum sentences for offenders and heavy fines for minors and their parents as part of a zero-tolerance approach.

“Rocks and firebombs are lethal weapons. They kill and have killed,” Prime Minister Benjamin Netanyahu told his Cabinet on Sunday. “Those who try to harm us, we will harm them.”

Over the weekend, police said it arrested 48 suspects in stone-throwing and firebombing incidents. Gilad Erdan, Israel’s new minister of public security, has taken an even tougher line — and outraged the country’s judiciary — by suggesting that the promotion of judges should be tied to how harshly they sentence Palestinian rock throwers.

Netanyahu appeared to side with Erdan on Sunday, saying “with all due respect to the courts,” it is the government’s “right and duty” to punish perpetrators as harshly as possible.

But at a special meeting Sunday, Israel’s attorney general, Yehuda Weinstein, said he opposed the proposed changes in open-fire regulations or setting minimum penalties for stone throwers, saying the current regulations are sufficient. Under pressure from Netanyahu and other ministers, Weinstein agreed to search for a compromise ahead of another meeting Thursday.

Neither Israel nor the Palestinians seem interested in another round of major violence. But following last week’s deadly rock-throwing incident, along with days of clashes at Jerusalem’s most sensitive holy site, the city appears to be on the precipice of a crisis.

The main source of tension is the situation at the hilltop compound in Jerusalem known to Jews as the Temple Mount and to Muslims as the Noble Sanctuary.

The site is home to the Al-Aqsa Mosque compound, where Muslims believe the Prophet Muhammad ascended to heaven. It is located on the spot where the biblical Jewish Temples once stood.

The conflicting claims to the holy site in Jerusalem’s Old City have frequently spilled over into violence.

In recent weeks, Israel has limited Muslim access to the mosque compound on several occasions to allow Jewish visitors to ascend. While Israel said this was a temporary move meant to reduce frictions, Muslims claim this is a violation of a longstanding “status quo” in place since Israel captured the area in 1967, and rumors have spread that Israel is plotting to take over the spot.

Netanyahu on Sunday called such suggestions “baseless, wild provocations” and said he was committed to preserving the status quo. More than 350 visitors toured the compound on Sunday with no violence.

For those living near where 64-year-old motorist Alexander Levlovich was killed last week, the new measures seem like a weak response to a danger that has been overlooked for some time. Rock attacks are rarely reported when they don’t cause casualties.

“It seems to me like giving a painkiller to a cancer patient,” said Nava Segev, a Jerusalem resident who says her home was hit with 17 firebombs in a single week. “This tradition of coming after something happens doesn’t seem effective to me.”

But Israel is limited in what it can do.

The rock throwing is mostly the domain of young men who appear to be unorganized and leaderless, making it hard for Israel to gather intelligence on pending attacks. Israel is also concerned that a harsh response to such attacks could lead to an escalation of violence, possibly igniting a new uprising. The collapse of peace talks last year and lack of contact between the two sides has only added to the tense environment.

Palestinians say the rock throwing is a visceral expression of frustration over their status in the city and particularly that of the mosque compound, where Israeli forces entered over the Rosh Hashanah holiday last week to disperse protesters who threw rocks and firecrackers. Palestinians consider the Israeli response excessive.

“We are talking about youth and kids who see on TV and social networks the practices of the Israeli police … and they react to it with throwing mainly stones and in some instances firebombs to show that they are angry,” said Adnan Husseini, the Palestinian minister for Jerusalem.

“Unfortunately, the Israeli government is responding to the anger of these kids with tough measures like allowing the use of live ammunition … This is a license to kill.”

While it is unlikely that the young rock throwers receive direct orders to carry out attacks, they operate in an ideological environment that encourages attacks on Jews, said Shaul Bartal, a reserve Israeli intelligence officer who is conducting research into the phenomenon of “lone wolf” attacks for Bar-Ilan University.

He said the new government measures may be able to make a dent, but short of infiltrating the Arab neighborhoods it would be hard to completely erase the threat.

“There can always be a situation where someone just decides to do something,” he said. “Israel has to figure out a way to cope with that.”