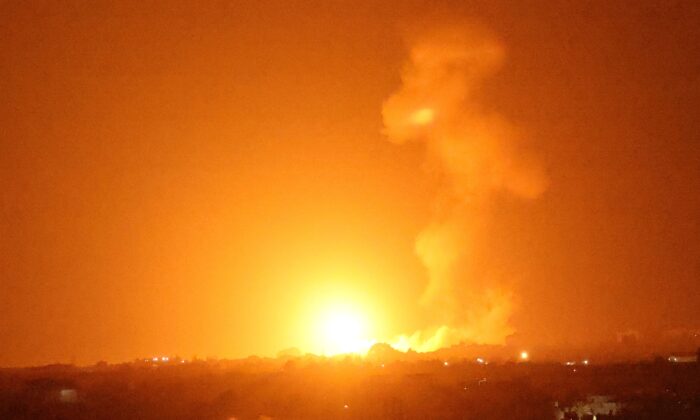 The Israeli military announced in the early hours of Sept. 13 that it had carried out strikes against four military compounds occupied by Hamas in the Gaza Strip in response to rocket fire from the Islamist terrorist group.

“Terrorists in Gaza fired rockets at Israel for the 3rd night in a row, endangering lives in Gaza and Israel. In response, we struck 4 Hamas compounds used for military training, a weapons workshop & an entrance to an underground terrorist tunnel,” the Israeli Defense Forces (IDF) wrote on Twitter.

The IDF said its Iron Dome system had earlier intercepted in “mid-air” two rockets fired from the Gaza Strip into Israel toward civilian areas.

In a separate statement, the IDF said it had struck a Hamas military post in Khan Yunis following the second rocket fired from the Gaza Strip, noting that it housed a machine gun that was used to fire toward Israel.

The incident marked the third consecutive night of fighting between the two sides.

Tension between Israel and the Palestinians has risen over the past week, after six Palestinian militants escaped from a maximum-security Israeli jail on Sept. 6. Israeli forces have since captured four of the escapees.

Drawing Israeli airstrikes, Gaza militants fired a rocket into Israel on Sept. 10, when two of the prisoners were apprehended, and then again on Sept. 11, after two more escaped inmates were caught. The Israeli military said it struck targets belonging to Hamas, the extremist group that rules Gaza. There were no reports of casualties.

A fragile truce between Israel and Hamas ended 11 days of fierce fighting in May in which at least 250 Palestinians and 13 Israelis were killed.

On Sept. 12, Israeli army Chief of Staff Aviv Kochavi warned Hamas that the IDF will “vigorously respond to every violation.”

“The Israel Defense Force defends the Gaza border and will not accept any violation of sovereignty,” Kochavi said. “If the situation escalates, Hamas and the Gaza Strip will pay a heavy price.”