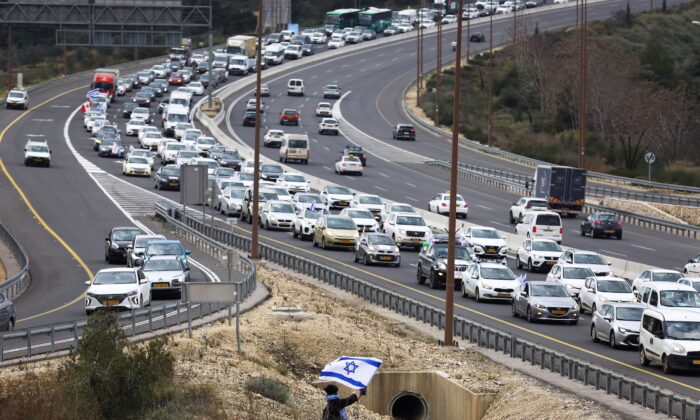 A demonstrator waves an Israeli flag as a "Freedom Convoy" inspired by Canadian truckers heads towards Jerusalem to protest against COVID-19 restrictions on Feb. 14, 2022. (Ronen Zvulun/Reuters)
Middle East

The convoy of Canadian truckers protesting COVID-19 mandates and restrictions has inspired people in other countries to follow suit with protests of their own, including Israel.

Thousands of Israeli protesters have joined a Canadian-inspired “Freedom Convoy” on Monday, with vehicles flying Israeli and Canadian flags while driving along the main highway linking Tel Aviv and Jerusalem.

In footage posted to social media, vehicles are heard blaring horns on Israeli roads as protesters are seen banging drums and blocking roads—mirroring a similar method Canadians have used to voice their grievances over the government’s COVID-19 mandates and restrictions.

“Over 30,000 vehicles in 40 convoys from 40 Israel cities united in Jerusalem earlier today to demand the removal of all COVID-19 restrictions and a return to normality,” said Oshy Ellman, a senior Israeli communications adviser. Authorities haven’t immediately released an official report on the exact number of participants joining the massive convoy.

HAPPENING NOW IN #ISRAEL. Over 30,000 vehicles in the Israeli #FreedomConvoy2022 that has gathered in #Jerusalem from across Israel to demand a return to normal life and the removal of all #COVID19 restrictions. pic.twitter.com/olmOsOicTO

Shany Shlomo, a 51-year-old administrator, told news agency AFP she decided to join the protest in the Israeli capital to speak up against the government forcing COVID-19 vaccines on citizens.

“Nobody can tell us what to put into our body,” she said.

Outside the parliament building in Jerusalem, protesters sounded horns and beat drums as they called for the restrictions to be lifted.

“We are all gathered here for freedom. Because for two years already, all this world is going mad because of all the mandates and all the things that don’t let us live as free as we are born,” said Jonathan Deporto, a 39-year-old protester.

In recent weeks, Israel has rolled back requirements to show proof of vaccination at restaurants, movie theatres, gyms, and hotels to coincide with a slowdown in daily infections from the Omicron variant of the CCP Chinese Communist Party) virus, but masks are still mandatory in public indoor spaces, including schools, shops, and medical institutions.

In Canada, the anti-mandate Freedom Convoy protests have paralyzed certain regions of Ottawa since late January, and they’ve also blocked crucial crossing points on the U.S.–Canada border. The truckers are demanding an end to vaccine mandates and the passport phone application currently required by the Canadian government.

The caravan of trucks may have set a world record, with an estimated 50,000 trucks having joined. The convoy was also able to raise over $10 million Canadian ($8 million USD) on fundraising website GoFundMe before the site shut it down over alleged violence or unlawful activity, without providing any evidence.

Worldwide, similar movements have sprung up, including in Australia, Belgium, the Netherlands, Switzerland, and France.

A crowd of protesters from France, Belgium, Germany and the Netherlands, gathered in Brussels on Monday to join a “European Freedom Convoy” modelled after the Canadian truckers. Protesters slammed the government’s CCP virus response, calling it “criminal” for officials to push COVID-19 vaccines on children and continuing mask requirements in schools.

“They will also vaccinate our children in the Netherlands from the age of 5. I find it criminal! The choice must remain with the people,” said Gerhard Velthorst, a former restaurant owner from the Netherlands.

A German protester and English teacher who joined the demonstration in the Belgian capital said he will not accept any more jabs.

“Leave us alone, we are peaceful, we will leave you alone,” he said.

In France, police fired tear gas at a “Freedom Convoy” on Feb. 12 protesting COVID-19 restrictions. The protests in France are against rules that mandate vaccine passes to enter public places.