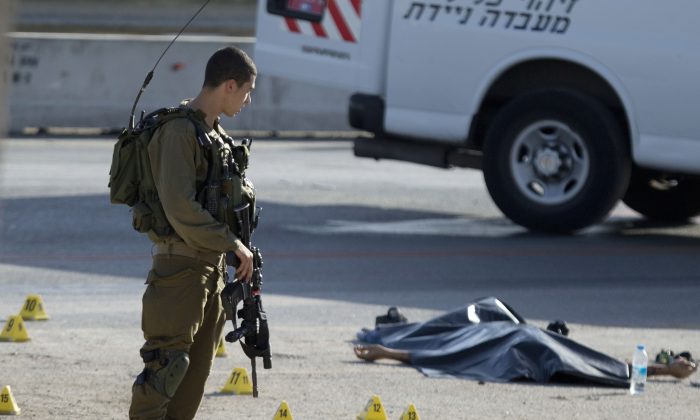 JERUSALEM—Israeli troops shot and killed a Palestinian woman at a West Bank checkpoint after she pulled a knife in an attempt to stab guards on Monday, the Defense Ministry said.

The woman — who was identified as 23-year-old Rasha Owaisi from the West Bank town of Qalqilya — ignored calls to stop and also warning shots that were fired in her direction as she walked toward a checkpoint near the Alfei Menashe settlement in northern West Bank, said ministry spokeswoman Arielle Heffez.

The Israeli army said troops were looking for another person suspected of involvement in the attack but provided no details.

The Defense Ministry released a note the woman allegedly left behind in which she pledged to “defend the homeland” and begged her parents and sisters for forgiveness.

Earlier Monday, the Israeli army said it struck a Hamas position in the Gaza Strip in response to a rocket fired Sunday evening into southern Israel. There were no injuries reported in Israel and no immediate comments from officials in Gaza.

In addition to stabbings, Palestinians have also carried out shooting attacks and have rammed their cars into groups of Israelis.

The bloodshed was triggered by unrest at a major Jerusalem shrine revered by both Muslims and Jews, and quickly spread to Israel, the West Bank and the Gaza border.

Israel has blamed the violence on incitement by Palestinian leaders. Palestinians say the attacks stem from a lack of hope for gaining independence after years of failed peace efforts.

Rights groups have alleged that Israeli troops have used excessive force against Palestinians, in some cases shooting and killing suspected attackers who the groups say could have been arrested.