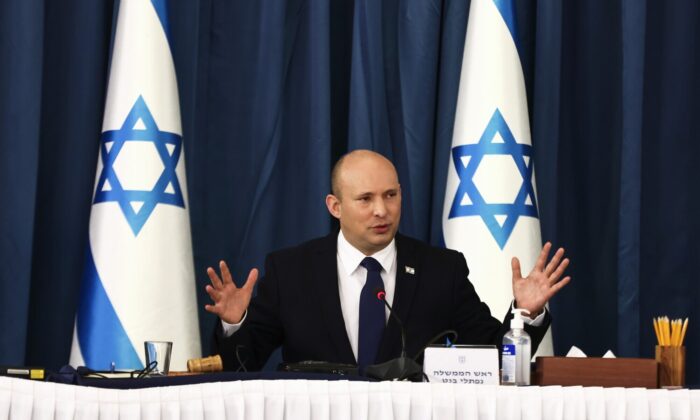 Israel said on Tuesday it will not be bound by any new nuclear deal with a goal of reviving the Iranian 2015 nuclear accord ahead of international talks with world leaders next week.

“In any event, even if there is a return to a deal, Israel is of course not a party to the deal and Israel is not obligated by the deal,” Prime Minister Naftali Bennett said during a news conference hosted by Reichman University.

Iran is set to resume the talks in Vienna, Austria, on Nov. 29, the European Union announced earlier this month. The EU said that the meeting of the commission of the Iran deal, called the Joint Comprehensive Plan of Action (JCPOA), will be attended by representatives from Iran, China, France, Germany, Russia, and the United Kingdom.

Israel has long opposed the nuclear deal. Although Bennett’s government previously said it could be open to a new deal with tougher restrictions, his remarks on Tuesday sounded less accommodating.

Bennett described Iran, which denies it is pursuing nuclear arms, as being at “the most advanced stage” of a nuclear weapons program.

“The mistake we made after the first nuclear deal in 2015 will not repeat itself,” he said in statements at the security forum in Herzliya, Anadolu Agency reported.

“From the moment the deal was signed, it was like a sleeping pill for us,” he added, stressing that if the deal is revived, Israel will not be bound by it.

Avigdor Lieberman, Israel’s finance minister, said that international talks between world leaders will do nothing to slow down Iran’s nuclear development.

“With or without an agreement, Iran will be a nuclear state and have a nuclear weapon within five years, tops,” Lieberman said.

Israel has long argued that the 2015 deal was too weak to prevent Iran from pursuing a bomb. The country has also complained that the nuclear agreement does nothing to rein in Iran’s ambitious missile program or hostile activity by Iran-backed militia.

“The Iranians have encircled the State of Israel with missiles while they sit safely in Tehran,” Bennett said. “To chase the terrorist du jour sent by the (Iranian covert) Qods Force does not pay off anymore. We must go for the dispatcher.”

The Iranian nuclear deal was planned to disincentivize the Islamic regime from developing nuclear weapons and to limit its nuclear program.

On May 8, 2018, under the administration of President Donald Trump, the United States announced its withdrawal from the Obama-era deal and imposed stringent sanctions on the regime, citing Israeli intelligence reports that revealed the existence of a secret Iranian nuclear program. President Joe Biden’s administration aims to revive the deal.

Following the U.S. pullout, the Iranian regime retaliated and publicly abandoned the deal’s limits on its nuclear development. Currently, Iran claims that its stockpile of 20 percent enriched uranium has reached more than 210 kilograms (463 pounds).

Enriched uranium is used for generating nuclear power. Under the JCPOA, Iran was prohibited from enriching beyond 3.67 percent. Enrichment of more than 90 percent is usually reserved for nuclear weapons.

If talks fail or Iran refuses to take part in the negotiations, U.S. Secretary of State Antony Blinken told his Israeli counterpart, Yair Lapid, that “every option” will be on the table.

On Nov. 9, the head of the Israel Defense Forces said that an attack on Iranian nuclear facilities is being considered. Israel has previously conducted airstrikes on rival nuclear programs, including on Iraq in 1981 and Syria in 2007.

Naveen Athrappully and Reuters contributed to this report