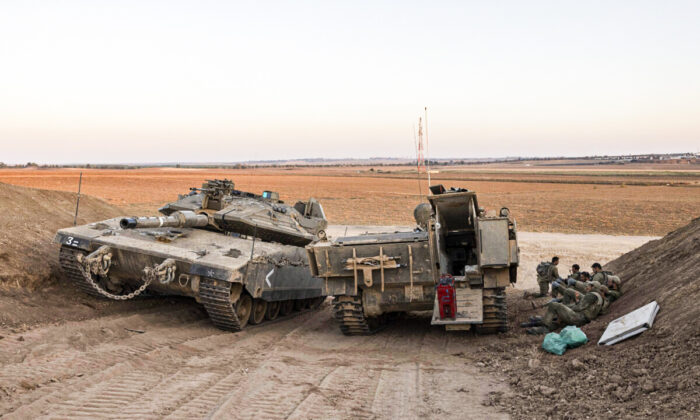 The head of the Israel Defense Forces (IDF) said on Nov. 9 that an attack on Iranian nuclear facilities is being considered.

IDF Chief of Staff Aviv Kochavi told the Knesset’s Foreign Affairs and Defense Committee that the army “is accelerating operational planning and preparedness to deal with Iran and the military nuclear threat.”

“Thankfully, the budget that was approved [last week] makes it possible to contend with a variety of threats,” Kochavi said, according to The Times of Israel.

In October, the Israeli government approved a budget of roughly 5 billion shekels ($1.5 billion) to be used primarily against Iran’s nuclear program. The funds are for preparing the military and procuring key “bunker-busting” resources, such as intelligence-gathering drones and various types of aircraft for destroying heavily fortified underground sites, according to reports from Israeli media outlets.

“Iran’s nuclear program has hit a watershed moment, and so has our tolerance. Words do not stop centrifuges from spinning. … We will not allow Iran to acquire a nuclear weapon,” Prime Minister Naftali Bennett told the U.N. General Assembly in September.

Diplomatic efforts by international agencies and multiple countries haven’t yielded any positive results regarding the 2015 Iranian nuclear deal. Iran has also begun employing advanced air defense systems against IDF jets in Syria. Considering the new threat level, the Israeli Air Force will begin training for the possible attack on Iranian nuclear installations at the start of 2022.

Israeli Defense Minister Benny Gantz told Knesset members that the country will work toward peace. But if war breaks out, they’ll conduct operations that “haven’t been seen in the past.”

On Nov. 9, Gantz inaugurated a weapons factory in the northern town of Shlomi, Israel, that was burned down years ago by Hezbollah rockets.

“On an operational level, we are acting extensively,” he said. “We won’t allow Hezbollah and other Iranian proxies in the area to be equipped with weaponry that will harm Israel’s [military] superiority in the region.”

With less than a month before the nuclear talks, the Iranian military has begun its annual war games. As part of the drill, fighter jets, helicopters, military transport aircraft, submarines, drones, and naval and ground forces, including commandos, are expected to be deployed.

The games are taking place in an area of more than 1 million square kilometers (386,100 square miles) east of the strategic Strait of Hormuz, through which nearly 20 percent of all oil shipping passes.

The Iranian nuclear deal, known as the Joint Comprehensive Plan of Action (JCPOA), was planned to incentivize the Islamic nation against developing a nuclear bomb and to limit its nuclear program.

On May 8, 2018, under the administration of then-President Donald Trump, the United States announced its withdrawal from the Obama-era deal and imposed stringent sanctions on the regime, citing Israeli intelligence reports that revealed the existence of a secret Iranian nuclear program.

Following this, the Iranian regime retaliated and publicly abandoned the deal’s limits on its nuclear development. Currently, Iran claims that its stockpile of 20 percent enriched uranium has reached more than 210 kilograms (463 pounds).

Enriched uranium is used for generating nuclear power. Under the JCPOA, Iran was prohibited from enriching beyond 3.67 percent. Enrichment of more than 90 percent is usually reserved for nuclear weapons.

After considerable delays, the talks between Iran, the United States, and the EU are expected to resume on Nov. 29 in Vienna. A dialogue had started in April, but it stalled when the ultraconservative Ebrahim Raisi won Iran’s presidential election in June.

“It’s not entirely clear to me yet whether the Iranians are prepared to return to talks,” U.S. national security adviser Jake Sullivan told reporters in October. “We have heard positive signals that they are, but I think we have to wait and see when and whether they actually show up at the negotiating table.”

If talks fail or Iran refuses to take part in the negotiations, U.S. Secretary of State Antony Blinken told his Israeli counterpart, Yair Lapid, that “every option” will be on the table.

Israel has previously conducted airstrikes on rival nuclear programs, including on Iraq in 1981 and Syria in 2007.