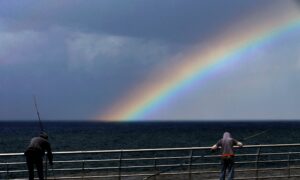 Israel Prepares for Possible Syrian Response to US and NATO Attack

TEL AVIV—The Israeli cabinet met for security consultations to determine a plan of action if the United States and NATO attack Syria. At the end of the meeting on Tuesday Prime Minister Benjamin Netanyahu said, “The State of Israel is ready for any scenario. We are not part of the civil war in Syria but if we identify any attempt whatsoever to harm us, we will respond and we will respond in strength.”

At the annual memorial ceremony in remembrance of fallen IDF Givati Brigade soldiers on August 27, Defense Minister Moshe Ya’alon said, “We hear the sounds of threats directed to the State of Israel. In the face of these threats, we are responsible and considerate, but we also say in a clear voice and determined: who dares to test us, will encounter the strength of the IDF (Israel Defense Forces).”

Brig. Gen. (Res.) Yossi Kuperwasser, Director General of the Israeli Ministry of Intelligence and Strategy said that Israel is not involved in the Syrian civil war and that Bashar al-Assad has no interest in attacking Israel, knowing it would illicit a harsh response.

Despite the low expectation of a possible attack from Syria, the IDF is getting well prepared. They decided to install in the northern border an additional Iron Dome missile defense battery, a Patriot missiles system, and to put on alert the Arrow system—an anti-ballistic missiles jointly funded and produced by Israel and the United States.

The United States supplied the Patriots missiles to Israel during the first Gulf war in 1990, which intercepted Squad Iraqi missiles launched to Israel.

Since then, the demand for masks, called CBRN (Chemical, Biological, Radiological, and Nuclear) kits, has been growing in Israel. Before the First Gulf War, the IDF Home Front Command distributed CBRN kits to the entire Israeli population. At the time the expectation was that Sadam Hussein would launch chemical missiles toward Israel in retaliation to the U.S.

It didn’t happen, but since then the Home Front has asked Israel to “refresh” their kits. For now according to the Home Front Command, 40 percent of Israelis do not have CBRN kits.

The Israeli Post Office, which supplies CBRN kits, reported that thousands of citizens have been collecting masks in the past few days with growing concern over consequences of a possible US attack on Syria.

In the small city of Shlomi, close to the Syrian border, the municipality opened 140 shelters, and is in constant contact with the Home Front Command.