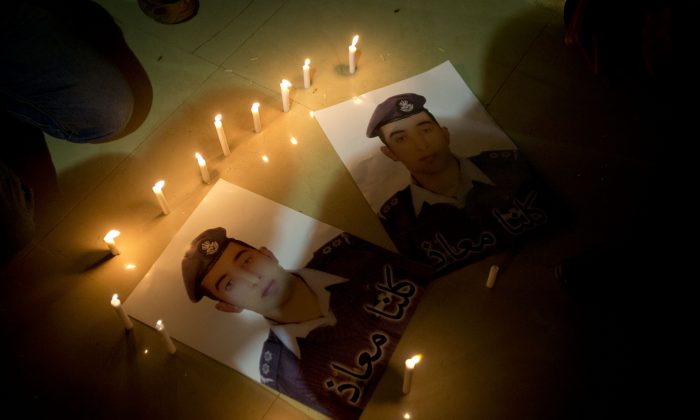 Members of Al-Kaseasbeh, the tribe of Jordanian pilot, Lt. Muath al-Kaseasbeh, who is was murdered by the Islamic State group militants, light candles by posters with his picture and Arabic that reads "we are all Muath." (AP Photo/Nasser Nasser)
Middle East

Israel Praises Jordan for Retaliating Against ISIS With Executions

The heavy-handed response was praised by one of Jordan’s neighboring countries, Israel. Israeli Foreign Minister Avigdor Liberman said in an official statement that Jordan’s King Abdullah deserved praise for “his prompt and forceful actions.” He also said that the Israeli people “support Jordan’s harsh and decisive response to the murder.”

Liberman didn’t stop there, though, stating that other countries should take notice of Jordan’s example.

“The leaders of the world must follow King Abdullah’s example in combatting terrorism in general, and ISIS in particular, because terrorism cannot be defeated by words but only by forceful action,” he said.

The execution of other convicted terrorists currently incarcerated in Jordan is expected to follow.

Terrorism cannot be defeated by words but only by forceful action.
— Israeli Foreign Minister Avigdor Liberman

The expedited executions for prisoners already on death row were a direct, initial response to the brutal ISIS murder of Jordanian pilot Muadh al-Kasasbeh.

The pilot had been held captive by ISIS since December, after his plane crashed. A video showed him being burned alive in a cage.

The al-Qaida prisoners executed in Jordan had been part of a potential trade between ISIS and Jordan that was promised as a way to secure the release of the pilot. The deal fell through at the 11th hour and ISIS went silent until it broadcast the execution of Japanese freelance journalist Kenji Goto, who was being held with the pilot.

Until the December 2014 executions of 11 men convicted of murder, Jordan had carried on an eight-year de facto moratorium on the death penalty, according to Human Rights Watch (HRW).

Eric Goldstein, a Middle East expert with HRW noted on the organization’s website on Wednesday that he believes Jordan’s use of the death penalty to somehow combat ISIS is misdirected.

“While the government’s desire to address public outrage is as understandable as the outrage itself, executing death row prisoners does not weaken ISIS,” wrote Goldstein. “This round of executions, the second in two months, is a further regression by a country that was until recently a regional leader in resisting use of the death penalty.”

Dozens of other suspected Islamic State sympathizers are currently detained in Jordan, most of whom were arrested during a crackdown over recent months.

ISIS now controls large parts of Syria and Iraq has an established pattern of taking foreign hostages and murdering them, then posting videos of the beheadings online. The murder of Jordan’s pilot has sent ripples of shock and anger throughout the Middle East, though.

It demonstrates the vulnerability of Jordan, a key Western ally in the region, to threats from extremists.