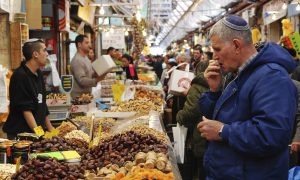 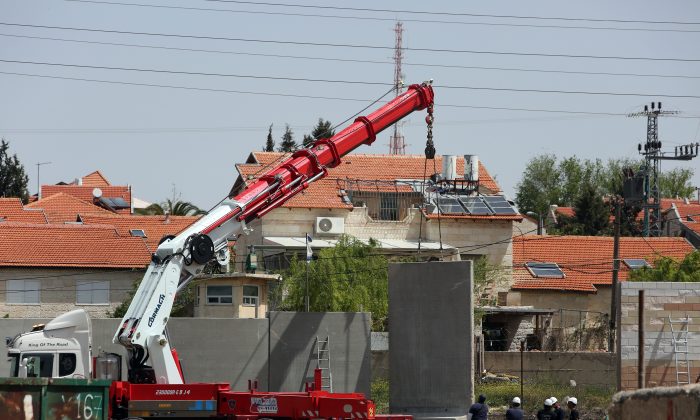 An Israeli crane lifts a section of concrete as they build a defensive wall around the Israeli settlement of Beit El, in the occupied West Bank north of Ramallah on April 7, 2015, next to a road used by Palestinians from the adjacent Jalazon refugee camp. (Abbas Momani/AFP/Getty Images)
Middle East

JERUSALEM—The Israeli Prime Minister’s office said Wednesday it has approved the “immediate construction” of 300 housing units in the West Bank settlement of Beit El and has advanced plans for 504 new housing units in Israeli settlement areas in east Jerusalem.

The announcement came amid a standoff in Beit El, where Israeli settlers clashed with Israeli forces as authorities began to demolish a contested West Bank settlement housing complex there. Israel’s Supreme Court ruled Wednesday that it must be demolished.

The Israeli government had fought the ruling and made efforts to legalize the complex, under construction without prior Israeli authorization. The Supreme Court rejected a petition to overturn the court’s initial ruling to demolish the complex, and ordered the demolition be completed by Thursday.

The military has declared the complex a closed military zone and removed protesters holed up there.

Tempers are high among some in the settler community as it marks a decade since Israel’s “disengagement” from the Gaza Strip, when Israel in the summer of 2005 withdrew all its civilians and soldiers from all of the settlements there and in a number of West Bank settlements.

Israel initially promised to build the 300 housing units in Beit El three years ago, when Israel ordered the removal of other buildings constructed on private Palestinian land.

The other announced housing units are throughout Israeli areas in east Jerusalem. Israeli leaders say these are inseparable neighborhoods of Jerusalem which will remain a part of Israel under any future peace agreement, but the Palestinians considers them settlements and says construction there is illegal settlement activity, a position backed by the international community.

Israel captured east Jerusalem in 1967 and annexed the area in a move that is not recognized internationally.