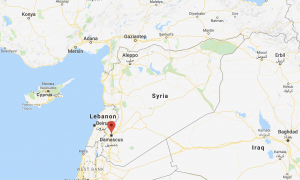 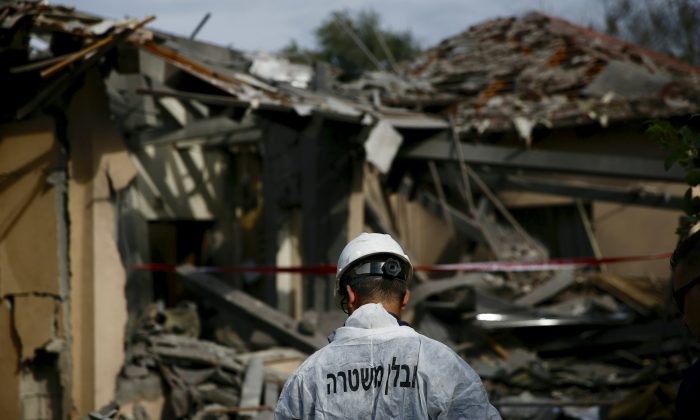 An Israeli police officer inspects the damage to a house hit by a rocket in Mishmeret, central Israel on March 25, 2019. (Ariel Schalit/Photo via AP)
Asia & Pacific

The early-morning rocket strike came at a sensitive time for both sides. Netanyahu, locked in a tight race for re-election, came under heavy criticism from his rivals Monday and faced tough pressure to strike back at Hamas.

The ISIS terrorist group, meanwhile, is facing perhaps its toughest test since seizing control of Gaza 12 years ago. An Israel-Egyptian blockade, imposed to weaken Hamas, combined with sanctions by the rival Palestinian Authority and mismanagement by the Hamas government have all fueled an economic crisis.

Hamas has been leading weekly protests along the Israeli border for the past year in hopes of easing the blockade, but the demonstrations have done little to improve conditions.

Last week, hundreds of Gazans took to the streets to protest the dire conditions, a rare expression of public discontent, prompting a violent Hamas crackdown that drew heavy public criticism.

Although neither side would seem to have an interest in a full-fledged war, they appeared to be on a collision course toward further violence.

Netanyahu, in Washington to meet President Donald Trump, held emergency consultations with military officials back in Israel. He said he would return home immediately after the White House meeting, canceling an address to the AIPAC pro-Israel lobby group and meetings with congressional leaders.

“There has been a criminal attack on the state of Israel and we will respond forcefully,” he said.

The sounds of air raid sirens jolted residents of the Sharon area, northeast of Tel Aviv, shortly after 5 a.m., sending them scurrying to bomb shelters. A strong sound of an explosion followed.

The rocket destroyed a residential home in the farming community of Mishmeret, north of the city of Kfar Saba, wounding six members of a family. The Magen David Adom rescue service said it treated seven people, including two women who were moderately wounded. The others, including two children and an infant, had minor injuries.

The Israeli military said Hamas terrorists fired the rocket from southern Gaza. It said its Iron Dome rocket-defense system was not activated because the attack in central Israel had not been anticipated. The army added it was reinforcing its missile defense batteries in preparation for an escalation.

Maj. Mika Lifshitz, a military spokeswoman, said it was a self-manufactured rocket with a range of 120 kilometers (75 miles), making it one of the deepest rocket strikes ever carried out by Hamas.

Lifshitz added that two armor and infantry brigades were being mobilized to the Gaza front and that a limited drafting of reserves was also taking place.

The family home in Mishmeret was left in ruins, with tiles, broken furniture and debris scattered about. A shattered baby’s crib lay among the rubble and two family dogs died in the explosion.

“I nearly lost my family,” said Robert Wolf, grandfather of the injured residents. “If we hadn’t gotten to the bomb shelter in time, I would now be burying all my family.”

Israel and Hamas, a terrorist group that seeks Israel’s destruction, are bitter enemies. They have fought three wars since Hamas overran Gaza in 2007, most recently in 2014, and engaged in dozens of minor flare-ups of fighting.

Monday’s attack came 10 days after rockets were fired from Gaza toward Israel’s densely populated commercial capital of Tel Aviv. The Israeli military at the time struck back and the sides appeared to be hurtling toward another confrontation. But Gaza’s Hamas leaders said the rocket was fired accidentally.

Hear directly from Israel Defense Forces Capt. Libby Weiss at the site of the Wolf’s house in Mishmeret that was destroyed this morning by a Hamas rocket from Gaza.Seven people were wounded in the incident, including a woman in her sixties who suffered blast injuries, minor burns and shrapnel wounds. A 12-year old girl and two infants also received shrapnel wounds, and two dogs were killed.Please keep all of Israel in your prayers…🙏🏽💙🇮🇱

There was no immediate claim of responsibility for Monday’s attack, but it would seem to be much harder to dismiss the latest incident as another misfire. Israel holds Hamas responsible for all rocket fire out of Gaza.

A possible trigger could have been a prison riot late Sunday when Hamas-affiliated inmates stabbed an Israeli guard in the neck in southern Israel. Guards moved in to subdue the rioters, wounding about a dozen prisoners, three of them seriously. In a statement, Hamas called for an end to the crackdown.

Hamas may also be seeking to heat things up with Israel to divert attention from its domestic problems. Senior Hamas officials, speaking on condition of anonymity because they were not authorized to discuss the matter with the media, said the group does not think that Netanyahu will launch a new war so close to the April 9 election.

Netanyahu, however, came under heavy criticism from allies and opponents for what they say has been an ineffective policy containing Gaza terrorists.

Netanyahu has conducted indirect cease-fire talks through Egyptian mediators in recent months, and even allowed the delivery of millions of dollars of Qatari aid to Hamas to ease harsh conditions in Gaza.

“The reality in which Hamas turned Israel into a hostage is unprecedented and unfathomable,” his chief challenger, Benny Gantz, wrote on Twitter on Monday. Gantz is a former military chief who led the army during the last Gaza war in 2014.

Netanyahu also came under attack from his own nationalistic allies.

“Israel’s deterrence has collapsed, and it has to be said in all honesty Netanyahu has failed against Hamas,” said Education Minister Naftali Bennett, head of the Yamin HeHadash faction in Netanyahu’s coalition.

We can confirm that #Hamas is responsible for firing a homemade rocket. It flew a distance of 75 miles across Israel and then destroyed this home: pic.twitter.com/nXytl8hcfl

Witnesses reported seeing Hamas evacuating personnel from government premises. Hamas also announced that its Gaza chief, Yehiya Sinwar, had canceled a public speech. Other leaders turned off their mobile phones, while Hamas police were seen evacuating their stations. Hamas even released some prisoners it was holding, in another sign of anxiety.

Israel also shut down its main crossings into Gaza and imposed restrictions on fishing off the Gazan coast.

Egypt, Qatar, and the United Nations are trying to broker a long-term truce between Israel and Hamas but that effort has yet to bring an agreement. At the same time, there has been an uptick in violence in the West Bank over the past week, with a stabbing and shooting that left two Israelis dead near a West Bank settlement and Israel’s killing of two Palestinians it said attacked troops.