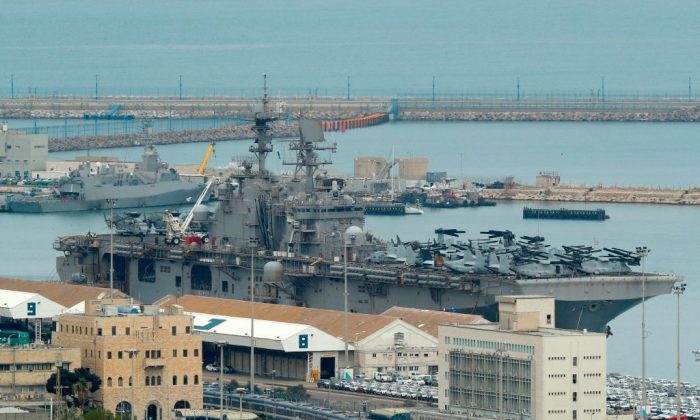 Israel has opened an interagency review into a Chinese business deal to develop part of the strategic port of Haifa, amid U.S. security concerns.

The Port of Haifa, one of Israel’s three major international seaports, sits in the eastern Mediterranean Sea and serves both commercial and military purposes.

The port provides repair and support facilities for the U.S. Navy Sixth Fleet, which consists of about 40 ships and 175 aircraft, and hosts joint U.S.–Israeli naval exercises. The port is also home to Israel’s naval base. Its main fleets, including missile warships and submarines, are stationed there.

In 2015, China’s state-owned Shanghai International Port Group (SIPG) was awarded the contract to operate the port’s new terminal—currently under construction by two Israeli construction firms and expected to be finished in 2021—for a total of 25 years. According to a March 2015 article by Israeli daily newspaper Haaretz, SIPG will pay a license fee and usage fee for the rights to operate the port, in addition to investing about 1 billion shekels (about $265 million) in equipment and infrastructure upgrades at the port before operation begins.

However, both U.S. and Israeli officials have raised security concerns about the Sino-Israeli agreement at Haifa.

Israel’s Jerusalem Post daily newspaper, in an article published Dec. 15, announced that the Israeli government has launched “a review of the [Haifa] agreement at a high level,” specifically among members of the government’s inner cabinet, made up of top ministers.

Citing three unnamed sources, the Jerusalem Post reported that the review was started after unidentified U.S. defense officials privately raised concerns with their Israeli counterparts. An unidentified senior officer with the Israel Defense Forces (the country’s military) confirmed that the review is underway, according to the Post.

Citing another unnamed source, the report said several members of the Israeli inner cabinet expressed concerns that the agreement with SIPG wasn’t “properly vetted by Israel’s full national security cabinet prior to approval.”

According to a Sept. 18, 2018, report by Haaretz, the decision to award the contract to SIPG in 2015 was made by the Transportation Ministry and the Port Authority. However, the country’s National Security Council (NSC), an advisory body on national security to the Israeli prime minister and government, did not take part in the discussion. Nor did the Israeli navy.

Unlike the United States, Israel doesn’t have an agency dedicated to reviewing foreign investment deals.

U.S. Navy Commander Kyle Raines, a representative of the Sixth Fleet, told the Jerusalem Post that Navy ships visit Haifa frequently for bilateral military activities and port calls. In response to a question about China’s presence at Haifa after 2021, Raines stated: “For now, there are no changes to our operations in Israel. I can’t speculate on what might or might not occur in 2021.”

But Gary Roughead, a retired U.S. admiral, expressed concern about the Haifa deal in a Sept. 14 interview with Newsweek magazine.

“The Chinese port operators will be able to monitor closely U.S. ship movements, be aware of maintenance activity, and could have access to equipment moving to and from repair sites, and interact freely with our crews over protracted periods,” he said.

The Middle East Institute (MEI), a non-profit think tank based in Washington also laid out security risks in an essay on the relationships between Israel, China, and the United States, published Nov. 27.

China’s presence at Haifa would allow the Chinese regime “access to sources of knowledge within the Israeli economy,” according to the MEI, which indicated that information about companies that send or receive goods through the port would be exposed to the Chinese port operator.

The MEI warned that, given well-documented cases of Chinese espionage and cyber attacks against U.S. companies, this could be a serious threat.

In another potentially troubling scenario for Israel: “Should the Chinese government, for whatever reason and at any time, decide to divert the ships that use this facility to another port, say, in Greece or Cyprus (where the Chinese already operate seaports), the Israeli economy would suffer great damage,” according to the MEI essay. Greek and Chinese media have reported that Chinese firms are interested in buying ports in Cyprus, but have yet to announce a deal.

China, through its “One Belt, One Road” initiative announced in 2013 for establishing Beijing-centered trade routes throughout the world, has invested heavily in European ports. For example, the Greek port of Piraeus is owned by China’s state-owned China Ocean Shipping (COSCO).

Beijing is also active in another major Israeli port, the Port of Ashdod, which it regards as crucial for Chinese trade with Europe.

China’s state-run China Harbor Engineering was awarded a contract to build a new terminal at Ashdod in September 2014, according to Israeli news site The Times of Israel. A China Harbor subsidiary, Pan-Mediterranean Engineering (PMEC), has begun construction, which is expected to be completed by 2021.