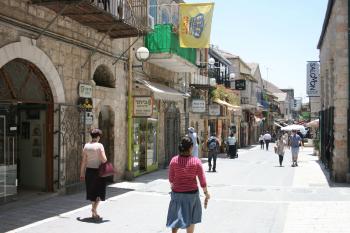 Israel Journal: The Women of Israel

Genevieve Belmaker
Genevieve Belmaker is a former reporter and editor with The Epoch Times.
View profile
Follow
biggersmaller
Print
JERUSALEM—Regardless of where I've traveled, the local women always fascinate me. How do they dress and do their hair? How do they interact with each other? How do they relate to their local men? How do they parent their children? What are their favorite topics of conversation?

Israel hasn't been an easy study in understanding what makes the local women tick. First, there is a language barrier since I speak about eight words of Hebrew. Second, the female population here comes from all over the world and brings the different characteristics of their native countries with them. Third, I don't buy into all the stereotypes associated with Jewish women. I think people are individuals, no matter how heavily influenced they are by their physical environment, culture, and ethnicity.

But if I were to subject Israeli women to analysis, I’d compare and contrast Jerusalem and Tel Aviv.

It took me weeks of living in Jerusalem to learn that the women clothed from head to toe with long skirts and shirts are religious. If their hair is covered with a scarf, they are married. They are the least likely to look you in the eye, speak to you, or be seen mingling in general public places like a coffee shop or the grocery store.

There are also conservative women in Tel Aviv, but in general you just see more skin. The environment overall is lighter and more metropolitan. The nightlife caters to people who like parties and clubs and cultural performances.

Then there are the women of the army in both cities, who walk about the streets in their olive green uniforms. Military service in Israel is compulsory. I’m always impressed by how stylish they manage to look while wearing the very ugly and masculine clothing. They still do their hair and wear jewelry and oddly, most of them manage to pull off the whole look with ease.

The country’s climate means that women generally dress a bit more casually. It’s rare to see ladies in Jerusalem in high heels walking on the uneven cobblestone streets and hills—whether religious or secular or somewhere in between. After experiencing days of extreme heat, dressing more casually starts to make sense. What’s the point in carefully doing your hair and getting dressed up when it’s so hot you can barely move? In both Tel Aviv and Jerusalem, function and common sense take precedence over high fashion, at least in the midday heat.

One thing women here have on everyone else is the boutique fashion industry, which would be the envy of women everywhere if more of them knew about it. I discovered there is a treasure trove of talented Israeli designers who create beautiful and unique dresses, handbags, and shoes—mostly made here. It’s a rare experience to walk into a store anywhere nowadays, take a dress off the racks, and have it fit and look beautiful. But I’m happy to report that there are still designers in Israel who understand how to make clothes for women.

One major difference between Tel Aviv and Jerusalem is how the image of women is used in public. A couple of weeks ago I passed a billboard in Tel Aviv of a woman in a bikini. The ad wasn’t in bad taste, but I realized I had never seen anything like it in Jerusalem. In fact, I’ve looked and can only find billboards of men in suits, cell phones, and ads for real estate property.

Many younger people across the country are flocking to Tel Aviv to experience big city life. But I happen to think that the understated charm and style of Jerusalem makes it a lovely place to live, regardless of your gender.