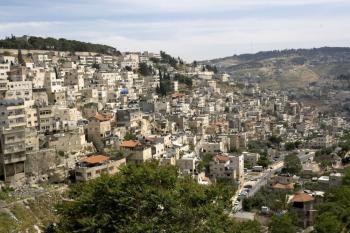 A picture of the east Jerusalem neighborhood of Silwan on April 28. Silwan is a hotly contested area of east Jerusalem with dozens of Arab houses slated for demolition by the city for lack of building permits . (Ahmad Gharabli/AFP/Getty Images )
Middle East

By Genevieve Belmaker
Print
JERUSALEM—My first month in Israel has been a fascinating and confusing experience. Fascinating because living in a foreign country, amidst a foreign culture, endlessly holds my interest. Confusing because interest in things I do not understand can become a road to nowhere if I can’t find answers to questions.

Lacking the context of a lifetime in the Middle East, I am often confounded by the simplest of things.

Take driving, for example. The first few times I rode in a vehicle in Israel, it was frightening to the point of exhaustion. I felt as though every pedestrian was a potential fatality, and every other vehicle on the road a potential collision. It took me a while to realize that even though things might seem a bit chaotic, there are rules of the road and they are being followed—if only loosely at times.

Walking through the city of Jerusalem can also be an exhausting and nerve-racking experience. Sometimes you come across little worlds unexpectedly that are full of their own rules and logic. It’s impossible to apply your personal sense of reason there. Silwan is a perfect example. It’s a hotly contested area of east Jerusalem with dozens of Arab houses slated for demolition by the city for lack of building permits. For the most part the Arabs who live there—some for generations—are refusing to budge.

Turn down a scenic hillside above Silwan, and you find yourself in a neighborhood called Al Bustan where youth regularly throw stones (some quite large) at Israeli police; at least four times in the past week, according to some local residents. The streets of the neighborhood look like the aftermath of collapsed buildings from an earthquake or a war zone. When I asked members of a neighborhood committee to preserve the Arab homes and presence in Silwan about the stones, they just shrugged in resignation.

“What am I going to do?” one of the men said loudly. “We are here, I don’t know where my teenage son is or what he is doing.” The implication of his attitude was unnerving. The streets of an entire neighborhood are littered with rubble in part because enough parents accept their children throwing stones at other people.

In an ultra orthodox Jewish neighborhood called Mea She’arim in the western part of the city, on Saturday, mobs of children (many very young), wait in the streets to taunt cars and immodestly dressed women (according to their standards) that pass by. The streets are blocked in places with garbage bins, and when a car comes, the children shout and run at it, or throw stones to scold the driver and passengers for driving on the Sabbath.

Silwan and Mea She’arim are like microcosms of Israeli life, where politics of life weave seamlessly through daily living, even among the youngest members of society. Just like the road has its own rules, so does life and the politics of all it is connected to. At the end they have one thing in common—don’t take every twist and turn and near miss too seriously, or you’ll be a nervous wreck as long as you’re on the road.