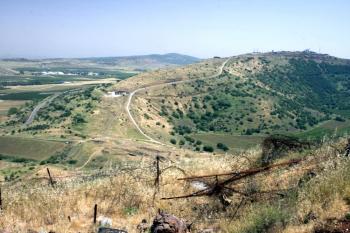 A view of the Golan near the cease-fire line with Syria, with a mine field in the foreground. (Genevieve Long/The Epoch Times)
Middle East

Israel Journal: A Land Without Borders

Genevieve Belmaker
Genevieve Belmaker is a former reporter and editor with The Epoch Times.
View profile
Follow
biggersmaller
Print
GOLAN HEIGHTS, Israel—Last week I took a trip to an area of Israel known as the Golan Heights, in the northeast corner of the country. Describing the Golan is difficult—above all else, it’s beautiful like a fairytale land that breathes life from every molecule of rich, volcanic soil.

The sense I had there was of floating in the clouds—the Golan sits on a plateau that gently slopes downward on two sides. This feeling lasted throughout my two-day background tour with a group of journalists. Traveling in our small bus with the staff of the organization that coordinated the trip, we went from the south of the Golan near the ancient Sea of Galilee to the heights of Mount Hermon at the Syrian border.

To say the “Syrian border” is actually a bit of an inaccuracy, or an incomplete statement, depending on whom you talk to. In 1967, Israel occupied most of the Golan. By 1974, due to instability and firing of weapons, there was a cease-fire and the U.N. established an observer force that acts as a buffer between Syria and Israel. So going west to east, there is Israel, a cease-fire line, a demilitarized zone (DMZ) where the U.N. sits, and then Syria.

During one of our briefings, a lanky Austrian U.N. representative showed us detailed maps explaining the Israel-Syria border situation. It took me almost a full three minutes to comprehend what he was saying.

“Here,” I thought to myself, “there is no border.”

The concept of a country without defined borders encompassing it haunted us for the entire trip. In all of our numerous briefings and interviews with locals, farmers, and government officials, the most frequently asked question was, “What will you do if the Golan is given back to Syria?”

At first the question didn’t make sense to me, until I realized that even the land we were standing on was disputed.

Even the “border” between Israel and Syria is at odds with itself. When I stood in the hilltops of the Golan looking out over Syria, I wasn’t looking from one country across a border. I was on a hilltop claimed by more than one country, looking across a cease-fire line, through the filter of a DMZ, and into another world.

Nowhere is the dispute over boundaries clearer than throughout the breathtaking landscape of the Golan. It is full of lush vineyards, fruit orchards, and bodies of water. In places, it looks like a photo of Italy. But look more closely, and you see that next to the fields where life is cultivated at the cease-fire line are fields of landmines. They litter the landscape with concertina wire fences and yellow hazard signs.

The feeling of danger from the landmines was palpable, particularly on the day that a wine grower was telling us about his vineyards on a lonely hilltop near Syria. Needing a restroom and being 20 minutes from civilization, I had to stand between an Israeli bunker wall and a mine field, hoping I wouldn’t take a step in the wrong direction.

Spending time in the Golan was like peeking through a window into the soul of Israel. Undefined, unsecured, uncertain, singularly beautiful, ever-changing, and evolving. Israel is, in its land and its people, a place without borders that moves through the pages of history as it lives out its present destiny. And so many of its people worry, even now, that a step in the wrong direction could be its end.