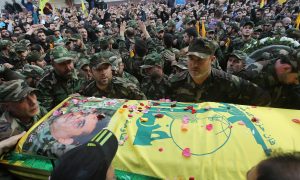 Hezbollah Chief Says Group Will Strike Back at Israel
0 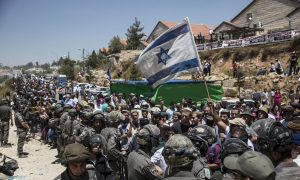 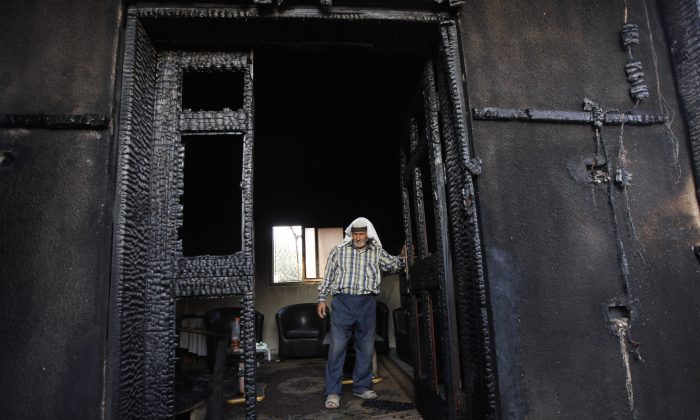 A Palestinian inspects a house on July 31, 2015, after it was torched in a suspected attack by Jewish settlers, killing an 18-month-old Palestinian child and his parents, at Duma village near the West Bank city of Nablus. Israel on Sunday indicted two Jewish extremists suspected in the attack, a case that has been unsolved for months and helped fuel the current wave of Israeli-Palestinian violence. (AP Photo/Majdi Mohammed)
Middle East

JERUSALEM—Israel on Sunday indicted two Jewish extremists suspected in a July arson attack on a Palestinian home that killed a toddler and his parents—a case that has been unsolved for months and helped fuel the current wave of Israeli-Palestinian violence.

The long-awaited indictment follows months of investigations into a web of Jewish extremists operating in the West Bank. The indictment named Amiram Ben-Uliel, a 21-year-old West Bank settler, as the main suspect in the attack. A minor was charged as an accessory.

Yinon Reuveni, 20, and another minor were charged for other violence against Palestinians. All four were charged with belonging to a terrorist organization.

The firebombing, carried out at night while the family slept, sparked soul-searching among Israelis.

It was condemned across the Israeli political spectrum and Prime Minister Benjamin Netanyahu pledged “zero tolerance” in the fight to bring the assailants to justice. Israel has authorized a series of steps, including holding several suspects without charge—a tactic typically used against Palestinian militants—to crack the case.

But critics have said that similar, albeit not deadly, attacks have festered for years with little action by the government. And for months, Palestinians watched angrily as the case remained unsolved, intensifying a feeling of skewed justice in the occupied territory, where suspected Palestinian militants are prosecuted under a separate system of military law that gives them few rights. The arson also touched on Palestinian fears of extremist Jewish settlers, who have attacked Palestinian property with impunity.

Palestinians cite the Duma incident as a factor in a three-month wave of attacks and clashes roiling the region, saying they are frustrated by years of unchecked settler violence.

Palestinian attacks against Israeli civilians and soldiers over the past three and a half months have killed 21 Israelis, mostly in stabbings, shootings and car-ramming attacks. That figure does not include the two Israelis killed Friday by an Arab man in a shooting attack on a Tel Aviv restaurant, as the motive for the attack hasn’t officially been determined yet.

During that time, at least 131 Palestinians have been killed by Israeli fire, 90 of them identified by Israel as assailants. The rest died in clashes with security forces.

Israel says the violence is being fanned by a Palestinian campaign of incitement. The Palestinians say it is rooted in frustrations stemming from nearly five decades of Israeli occupation.

The violence continued Sunday as a female Israeli soldier was shot in the West Bank city of Hebron, the military said. She was moderately wounded and troops were searching for the shooter.

Israel’s Shin Bet security service said Sunday that the suspects admitted to carrying out the Duma attack, saying it was in retaliation for the killing of an Israeli settler by Palestinians a month earlier. It said all the suspects were part of a group of extremists that had carried out a series of attacks over the years in a religiously inspired campaign to undermine the government and sow fear among non-Jews.

The indictment said Ben-Uliel admitted to spraying graffiti on the Dawabsheh family home and then tossing a firebomb through a bedroom window before fleeing the scene. Ben-Uliel’s parents said they believe in his innocence and that he was tortured during interrogation.

Nasser Dawabsheh, Saad’s brother, said the indictments were not enough.

Jewish extremists have for years vandalized or set fire to Palestinian property, as well as mosques, churches, the offices of dovish Israeli groups and even Israeli military bases. The so-called “price tag” attacks seek to exact a cost for Israeli steps seen as favoring the Palestinians.

The extremists are part of a movement known as the “hilltop youth,” a leaderless group of young people who set up unauthorized outposts, usually clusters of trailers, on West Bank hilltops—land the Palestinians claim for their hoped-for state. A lawyer for one of the suspects says his client gave a forced confession after interrogators deprived him of sleep and tied him upside down by his feet.

The Yesha council, an umbrella group of West Bank settlements, commended the indictment and said the suspects do not represent it.

“It is now clear that these acts were perpetrated by a fringe group of anarchists bent on destroying the State of Israel and the freedom and justice that it represents,” it said in a statement.