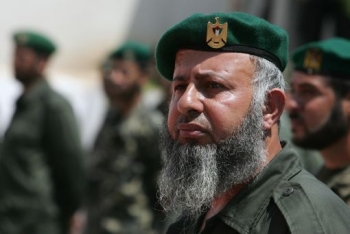 A Hamas security man looks on as his leader Ismail Haniya (unseen) reviews the honour guard during a visit to the Hamas security headquarters in Gaza City on July 7, 2008. (Mohammed Abed/AFP/Getty Images)
Middle East

The struggle between Israel and the Hamas, an Islamic militant organization that denies Israel's right to exist, is now playing out on different grounds. Israel is realizing that besides controlling Hamas through military means, another maybe more effective way is to go after Hamas' lifeline—its worldwide fundraising network. It is estimated that through this network tens of millions of dollars are transferred to Hamas every year.

Israel's Government Press Office released a statement on Monday saying that Defense Minister Ehud Barak had signed an order declaring 36 funds around the world and members of the "Union of Good" organization to be banned associations in Israel since they are part of Hamas's fundraising network. This joins a series of previous declarations against Hamas's overseas charity organizations that operate out of Turkey, Qatar, South Africa, Austria, Jordan, France, the Netherlands, Italy, Denmark, Sweden, and other countries.

Hamas, which competes with the Palestinian Authorities in attempts to win the hearts of the Palestinian people, depends on the funds to finance its diverse activity. This includes establishing and running welfare, health, religious, and educational institutions for the local population. The funds are also used to support terrorists and their families, to launder money to finance media and propaganda, and to purchase arms and ammunition.

Hamas, which currently holds a majority of seats in the elected legislative council of the Palestinian Authority, is listed as a terrorist organization by Canada, Israel, Japan, and the United States. The European Union defines Hamas as a group "involved in terrorist attacks" and has implemented restrictive measures against it.