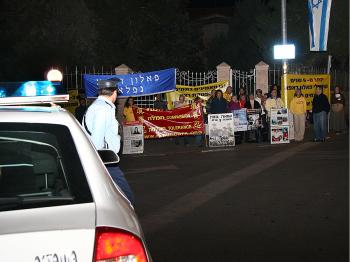 reporter from the Israeli Galei Zahal radio station, that was allowed to cover the meeting, interviews Gilad Slonim from the Hebrew edition of The Epoch Times. (Tikva Mahabad/Epoch Times)
Middle East

On Monday, December 1st, the Israeli president held a meeting with Liu Yunshan, the Communications Minister of the Chinese regime. At the beginning, the meeting was open to all media outlets in Israel, and an invitation was sent out prior to the event.

Two Israeli journalists, one from the Epoch Times newspaper and the other, a cameraman for New Tang Dynasty Television (NTDTV) were not allowed to attend the event, due to pressure and deception from the Chinese communist delegates.

The Epoch Times and NTDTV are known for their broad coverage of the Chinese regime’s persecution of Falun Gong practitioners. In his current position, Liu has been in charge of the nationwide anti-Falun Gong propaganda.

Liu has hosted the national conference on "Report of Exemplary Deeds in Fighting with 'Falun Gong,'" given speeches at the opening ceremony of a large anti-Falun Gong exhibition, and convened an anti-Falun Gong Symposium in his role as Director of the CCP Civilization Management.

Tal Atzmon, the NTD photographer that was banned from the event, said in an interview that he entered the hall in which the meeting was to be held, prior to the start of the meeting. "Everything was fine", he said. "After a while I was approached by a spokesperson from the president's office who told me I should leave, since the event was open only to Chinese media. I heard from an Epoch Times reporter that the President’s spokesperson told him that I had personally offended the Chinese delegates, though I did not have any contact with them."

Gilad Slonim, an editor with the Hebrew Epoch Times edition said, that unlike Atzmon, his entry was denied even before he came inside the hall. "We got an invitation to cover the meeting between the President and the Politburo member," he said. "But when we got there they said it was only open to Chinese media. When we later approached the President's spokesperson, she told us that they had been subjected to much pressure, and that the Chinese communist delegates even threatened to cancel the meeting if we were to be allowed to cover the event. I later talked to the spokesperson and got the impression that she had been misled by the Chinese communist delegates; I think she now understands that she made a mistake. She promised to check the reasons why we were asked to leave, and if she finds that it was an attempt to deny the freedom of the press, she will send out an official apology.”

Roi Antebi, a reporter for the Israeli Military Radio station, also covered the event. According to Antebi, he was allowed access to the meeting hall like any other meeting, and no one said anything to him implying that the meeting open only to Chinese press.

"I feel ashamed that my president, on behalf of the Israeli people, meets with such an awful man," he said. "There is much blood on his hands. He has committed so many crimes. He is responsible for the torture of so many people, for locking them up in camps where their organs are harvested. He should not be allowed to even touch this holy land of Israel.”

Tamuz Itai, CEO of the Epoch Times Hebrew edition, said after the incident that, "the most important point is that the Chinese Communist Party deliberately lied to the staff of the President's office and defamed The Epoch Times and its staff, in order to ensure that no hard questions were asked. It is a deliberate attack by a foreign country on the freedom of the press and freedom of speech in Israel."