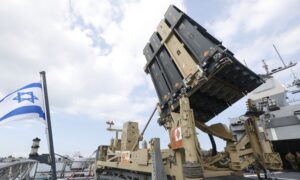 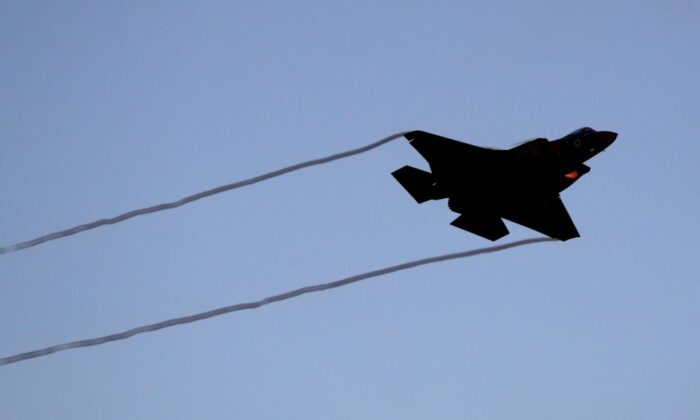 An Israeli fighter jet performs during an air show at the graduation ceremony of Israeli pilots in the Hatzerim Israeli Air Force base in the Negev desert, near the southern Israeli city of Beer Sheva, on June 27, 2019. (Jack Guez/AFP/Getty Images)
Middle East

A series of incendiary balloons launched by Hamas terrorists towards the southern Israeli border led to an overnight bombing on a manufacturing site in the Gaza Strip, military officials said Friday.

The Islamic terrorist group that rules Gaza confirmed that one of its manufacturing sites which focuses on researching and developing weapons was hit in the attack. No immediate reports of casualties were reported from the strike.

“In response to the arson balloon fire towards Israeli territory today IDF (Israeli military) fighter jets struck (a) weapons manufacturing site belonging (to) Hamas,” the military said in a statement.

On Thursday, the terrorist group again launched balloons laden with incendiary material across the southern Israeli border, causing another round of fires that have burned fields.

Israel Fire and Rescue Services said most of the fires were small and not dangerous with responders being able to manage the situation quickly and gain control over the fires, the Times of Israel reported.

Hamas said it has launched a series of arson balloons since the May 21 ceasefire ended as a way to pressure Israel to ease restrictions on the coastal enclave that were tightened during the May fighting.

Over the past three years, Islamic terrorists in the Gaza Strip have sent thousands of balloons laden with incendiary material and explosive devices into southern Israel, causing widespread fires and significant damage to agricultural fields, nature reserves, and private property. The attacks were mostly linked to Hamas, although there are also some other terror groups that have launched similar attacks.

Since Israel and Hamas engaged in the military conflict in May, over 200 Palestinians and 13 Israeli’s were killed, which saw terrorist groups in Gaza launching rockets towards Israeli cities.

The Israeli military then responded to the attacks by carrying out airstrikes across the coastal enclave.