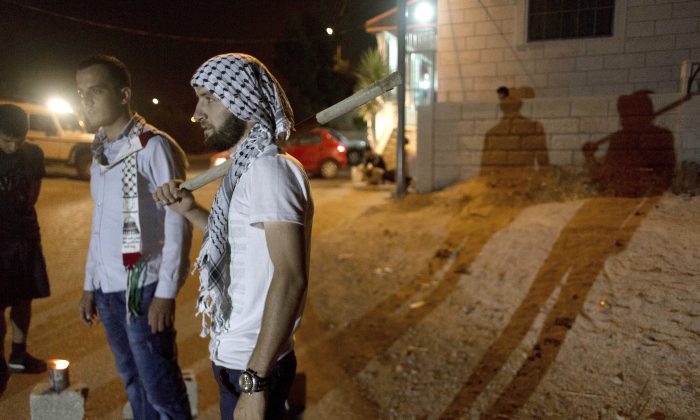 In this Tuesday, Aug. 4, 2015 photo, Palestinian villagers stand guard at the entrance of the West Bank village of al-Jab'a, near Bethlehem. The Residents of the village formed groups of defense volunteers to guard themselves from attacks of Israeli settlers. (AP Photo/Nasser Nasser)
Middle East

JERUSALEM—Israel on Thursday announced the arrests of several Jewish extremists with possible connections to an arson attack that killed a Palestinian toddler and his two parents in July — moving closer to solving a case that has enraged Palestinians and been a key factor fueling a two-month wave of Israeli-Palestinian violence.

Palestinians have repeatedly claimed that Israel’s slow movement in making arrests in the arson reflected what they see as an unfair justice system that moves swiftly in finding Palestinian suspects in violence. They frequently cite the lack of progress as a source of anger behind a string of attacks that began in mid-September and show no signs of ending.

In the latest unrest, the Israeli military said a Palestinian man opened fire on Israelis outside of Jerusalem, wounding two people before security forces shot and killed him.

The arson attack occurred in July in the West Bank village of Duma. In the middle of the night, assailants, believed to be Jewish extremists, lobbed a firebomb into the Dawabsheh family’s home, where four family members were asleep. Ali Dawabsheh, a toddler, was burned to death, while his mother and father later died of their wounds. His 4-year-old brother Ahmad is being treated in an Israeli hospital. Hebrew graffiti reading “revenge” sprayed on the walls of the home hinted that the attackers were Jewish.

Israeli leaders from across the political spectrum condemned the attack, but the lack of suspects has remained a sore point among Palestinians. Earlier this month, Israel’s defense minister had said Jewish extremists were involved, but that there was not enough evidence to prosecute.

The Shin Bet, Israel’s internal security agency, said Thursday it had arrested a number of youths belonging to a “Jewish terrorist” organization and that interrogators were checking “concrete suspicions” they were connected to the Duma attack.

In Thursday’s violence, the military said a Palestinian attacker got out of a car and opened fire near the West Bank village of Hizme, on Jerusalem’s northern outskirts. One soldier and a civilian were wounded before security forces killed him.

As Kerry Visits Israel Again, No Talk of Peace Deal

Since mid-September, 19 people have been killed on the Israeli side from Palestinian stabbings, shootings and vehicular attacks. At least 101 Palestinians have been killed, including 66 said by Israel to be attackers. The rest died in clashes with Israeli security forces. In addition, an American student was killed in a Palestinian attack and an Eritrean migrant was shot dead by an Israeli security guard after he was mistakenly identified as an attacker.

Israel blames the violence on incitement by Palestinian leaders and on social media sites. Palestinians say the attacks stem from a lack of hope for gaining independence after years of failed peace efforts.

Early Thursday, the Israeli army demolished the home of a Palestinian accused of orchestrating the deadly shooting of an Israeli couple of Oct. 1. The military identified the man as Raeb Ahmed Muhammad Alivi, in his late 30s. He was arrested days after the attack.

According to the army, Alivi led a five-member Hamas cell that shot and killed Rabbi Eitam Henkin, a U.S. citizen, and his wife Naama as they drove in the northern West Bank. Their four young children in the back of the car escaped unharmed.

Israel says home demolition is an effective tool to deter attacks, but critics say the tactic amounts to collective punishment.