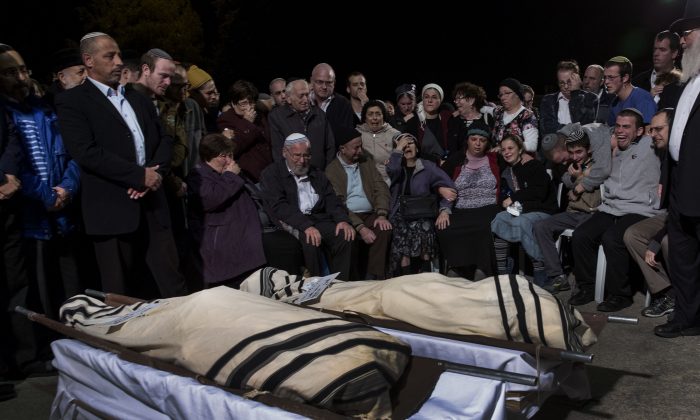 It said forces also seized a weapon and a vehicle used in the shooting, and that the suspect admitted to involvement in Friday’s attack, which killed a rabbi and his son as they were driving with family south of the city of Hebron. It was not clear when the suspect was detained.

The attack was the latest in a wave of violence in which Palestinian assaults on Israeli civilians and soldiers have become an almost daily occurrence.

Hebron, the largest West Bank city, has been a flashpoint in the current bloodshed. Several hundred Jewish settlers live in fortified enclaves in the city, amid tens of thousands of Palestinians.

Israel closed entrances to Hebron and arrested 20 suspects in the area while searching for the shooter over the weekend.

The shooting Friday was the latest escalation in two months of Palestinian attacks, mainly stabbings, which have killed 14 Israelis. At least 81 Palestinians have been killed, of whom Israel says 51 were involved in assaults. The rest were killed in clashes with security forces.

At the funeral for the two shooting victims on Saturday, Israeli President Reuven Rivlin compared the assault with the Friday attacks that killed 129 people in Paris.

The drive-by shooting Friday recalled an attack in early October, when Palestinian gunmen killed an Israeli couple traveling with their four children in the northern West Bank. The Shin Bet later arrested five Palestinians it said were part of a Hamas cell that carried out the attack.

The current violence began in mid-September with clashes in and around a sensitive Jerusalem holy site revered by Muslims and Jews.