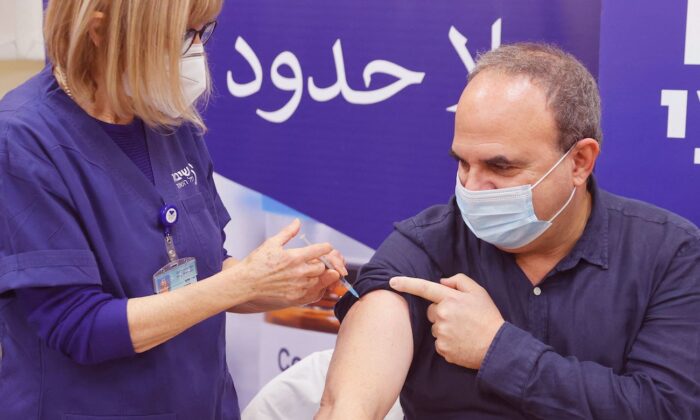 An Israeli man receives a fourth dose of the Pfizer-BioNTech COVID-19 coronavirus vaccine , as the Israeli hospital conducts a trial of the vaccine's fourth jab on staff volunteers, at the Sheba Medical Center in Ramat Gan near Tel Aviv, on Dec. 27, 2021. (Jack Guez/AFP via Getty Images)
WORLD

The Israeli government has approved a second COVID-19 vaccine booster shot for people with weakened immune systems, such as cancer patients and organ transplant recipients.

It comes after the country’s Pandemic Expert Committee last week recommended the fourth shot of the Pfizer-BioNTech vaccine for immunocompromised people, people older than 60, and health care workers.

“Today, I approved giving the fourth vaccine to the immunosuppressed, sick people with diseases and treatments that are hurting the immune system,” Nachman Ash, director general of the Israeli Health Ministry, told a news conference on Thursday.

“I did this based on research that is showing the benefits of the vaccine, including the fourth vaccine, for that population, and in light of the concerns that they are more vulnerable to the outburst of [the Omicron variant]. We will continue to track the data on a daily basis and we will see if we need to broaden this recommendation to an additional population,” he added.

The Israeli government has yet to announce an approval of a 4th COVID-19 vaccine dose for those over age 60 and health care workers.

“In light of the existing gaps in knowledge in the world about the effectiveness of a fourth dose, in the present situation, we are acting cautiously and responsibly,” Ash said on Thursday. “If we see signs showing severe illness is expected to rise among the older populations then we will make that decision. The challenge is to make it early enough to vaccinate them in time.”

On Monday, an Israeli hospital—the Sheba Medical Center—administered the second booster shots—the fourth COVID-19 vaccine shots—to a test group of health workers, in what it called the first major study into whether another round of boosters will aid against the Omicron coronavirus variant. Results are expected within two weeks. The “second booster” trial involves 150 people with low antibody levels.

Israel was among the first countries in the world to introduce a COVID-19 vaccine for the public, and began freely offering boosters last summer after research suggested that immunity waned over time.

The country was also among the first in the world to introduce vaccine passports and mandatory vaccinations.

Despite widespread vaccination, Israel experienced a wave of COVID-19 cases attributed to the Delta variant. Officials are warning of another wave, this time driven by the Omicron variant.

Israel has largely relied on the Pfizer-BioNTech vaccine in its public rollout, until about August, when it largely pivoted to the Moderna vaccine. The Pfizer vaccine is still being administered to those under 18 because the Moderna vaccine has not yet been approved for them. The Pfizer vaccine is also being administered to people waiting on their second COVID-19 dose.

Israeli authorities previously announced on Nov. 15 that children aged 5–11 would be eligible for the weaker dosing of the Pfizer COVID-19 vaccine—coming just a week after the U.S. Centers for Disease Control and Prevention (CDC) recommended the pediatric shot for broad use in that age group.

Earlier Thursday, Israel received its first shipment of Pfizer’s anti-COVID-19 pills, Paxlovid. The pills are intended to be used at home to decrease hospitalization and death, and they will be available in the country for free to those in high-risk groups.