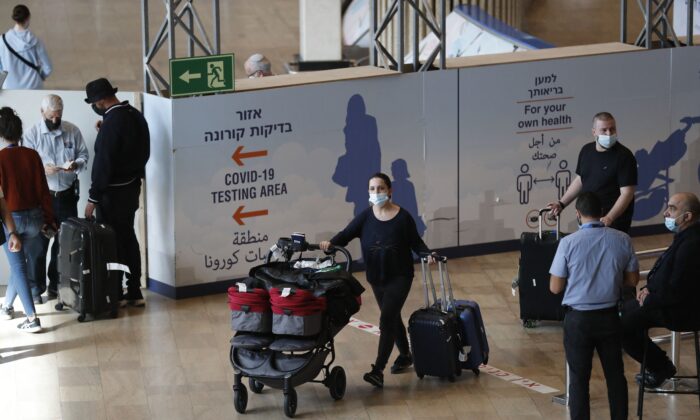 Israel Adds US, Canada, 8 Others to CCP Virus ‘Red List’ Amid Omicron Concerns

The Israeli government on Monday agreed to add the United States and nine other nations to the list of “red” countries amid concerns over the spread of the Omicron variant of the CCP virus.

The office of Israeli Prime Minister Naftali Bennett said in a Dec. 20 press release that government officials had approved in a telephone vote to ban all non-essential travel to 10 countries in total.

“The cabinet ministers have now approved … the expansion of the list of red countries in accordance with the recommendation of the Health Ministry State Classification Committee pursuant to a discussion that was held yesterday at the Cabinet meeting,” Bennett’s office said.

A Health Ministry advisory committee recommended on Dec. 19 that Israel should add the United States to the list of “red” countries to which its citizens cannot fly without special permission.

After this time, Israelis will be barred from traveling to and from destinations added to the COVID-19 red list while returning travelers will be required to undergo a 3-to 14-day quarantine.

“This government did a major thing when it made a quick and strong decision around three weeks ago to restrict entry to Israel and greatly delayed the entry of the variant to Israel,” Bennett’s office said in a separate statement.

In the first response to Omicron—which was first detected in South Africa last month—Israel banned the entry of foreigners on Nov. 25 and also imposed a quarantine order for Israelis returning from abroad.

“We bought precious time for the State of Israel and we delayed the Omicron by at least three weeks,” Bennett said, adding that this time is now running out and it is “simply not enough.”

“It’s possible to say that the fifth wave has begun,” he added.

Israel has logged 134 confirmed Omicron cases and another 307 suspected cases, the health ministry said. Of these, 167 were symptomatic, it added.