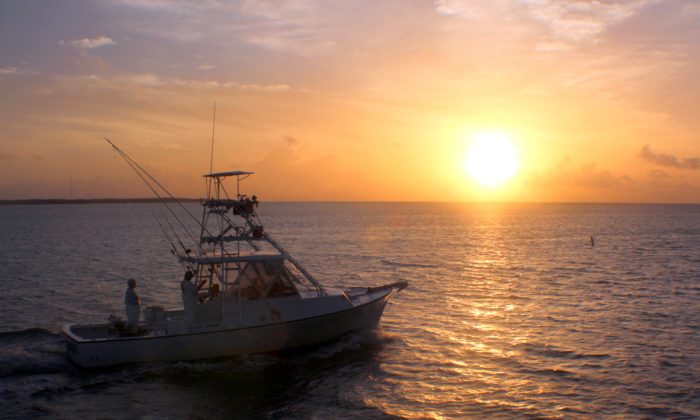 We pulled out of Whale Harbor Marina before sunrise. The Atlantic was a little rough. A cool wind blew shoreward. Captain Steve Stough brought ‘Warrior’ through the channel as other fishing boats started their engines and headed out. When sunrise broke, purple velvet showed through a slit over the horizon. Pretty soon a great orange ball began the day.

We rode up on the bridge with Captain Steve. It afforded spectacular views of sunrise as we headed out. The Atlantic had 4 to 6 foot waves. A 15-knot wind blew steadily. ‘Warrior’ is a heavy, solidly built sportfisherman. It was even and steady in the seas. “The water is really shallow. It will take us a half-hour before we get off the reef,” the captain explained.

Islamorada in the Florida Keys is billed as the ‘Sportfishing Capital of the World.’ Only a narrow spit of land divides the ocean and bay. A world of water awaits anglers. Porpoise cavorted in Whale Harbor Channel. The captain was heading out to a place they call ‘The Hump.’

“It comes up on the depth finder about ten miles out. It’s an underwater mountain surrounded by 450 to 500-feet depth. When we get out there we’ll look for a weed line,” Captain Steve explained. There are three main fishing reefs off Islamorada: Alligator, Conch and David.

“David is a real hot one for bait. We catch ballyhoo there. We are 80 miles east to the Cay Sal Banks, 120 miles to Bimini,” he told us.

Once out of the channel Charlie VanKalker baited and set poles off the stern. Captain Stough lovingly restored ‘Warrior’ himself. He bought the 1971 Hatteras 53-foot Convertible from a tow boat company. The vessel had been seized by customs, tied up and neglected.

‘Warrior’ has the latest Garmin navigation equipment including bottom finder and side-scan sonar. The 42-ton sportfisherman has a 2,500 mile cruising range. It’s 16-foot beam makes it comfortable and roomy. Woodwork has been replaced with Afromosia teak. There is a flash-freezer aboard so fishing clients can have their catch frozen for travel. Two live wells and two ice wells and an ice-maker gives ‘Warrior’ autonomy at sea. The sportfisherman cruises at 15 knots and can attain 20 knots.

Captain Steve set the outriggers and we were fishing. There was a hit. Charlie took the pole until the hook was set then passed it over. ‘Warrior’s’ fighting chair is top-notch. There was good action as the blackfin tuna was brought close then landed. First fish of the day. We were after dolphin. Better called Dorado or Mahi Mahi so people don’t confuse them with marine mammals.

We were ten miles out in 327-feet of ocean when the first bonita hit. Charlie set the hook and passed the pole. Myriam cranked it in. Another pole took a hit. Charlie hooked it and began to reel in, careful to pass under the action on the other line. A third pole got a hit. A bonita leaped out of the water off the stern. Charlie took the gaff and brought it aboard. He passed the second pole over and cleared the third line.

This was fast action. All three fish were brought aboard. After pictures they were stowed in the ice well. It didn’t take long for a dolphin to strike. This was ocean fishing at its best. Captain Steve watched the action from the bridge and worked ‘Warrior’ to the fishing. The line was out so it required a lot of cranking before a nice size dolphin came astern. It leaped out of the water showing its golden sides.

Charlie gaffed it and took the magnificent male aboard. Then we relaxed. Captain Steve continued trolling. We had plenty of time to sip cold water and enjoy the cabin. Winter offshore Islamorada is sailfishing season. Kings come it. In summer dolphins run. Blackfin tuna run with a possibility of blue and white marlin. All the grouper hit in summer: snowy, black, raspberry. We were trolling with outriggers for dolphin.

Teasers were out; the hooks were baited with ballyhoo. There was a strike. A big fish hit the line. Charlie set the hook. There was a minute of action before it got off. The pole was baited again and we continued to troll. It wasn’t long before another dolphin hit.

Captain Steve is a Scuba diver. He keeps tanks and dive gear aboard. Fishing clients that want to go over side can enjoy the reefs, especially on charters to the islands. It was a good day. Plenty of fish, convivial atmosphere and a solid sportfishing boat. This day out on the Atlantic proved Islamorada’s claim. It was the ‘Sportfishing Capital of the World’ for us.

For more information contact Captain Steve Stough, Team Warrior Sportfishing, 305-877-9583 or email him at charter@teamwarriorsportfishing.com. For information about Islamorada contact their Chamber of Commerce by calling toll-free 1-800-FAB-KEYS or 305-664-4503 or visit their website at www.islamoradachamber.com.