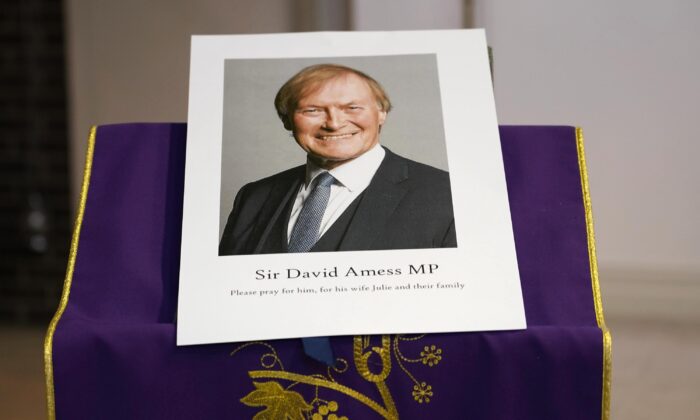 An image of murdered UK Conservative lawmaker David Amess is displayed near the altar in St Peters Catholic Church before a vigil in Leigh-on-Sea, England, on Oct. 15, 2021. (Alberto Pezzali/AP Photo)
UK

A British terrorist of Somali descent has been handed a whole-life prison term for the murder of Conservative MP Sir David Amess.

Amess, a 69-year-old father of five who had served as MP for the Southend West constituency since 1997, was meeting with constituents when he was attacked.

During his trial, Ali said he had no regrets about the murder, justifying his actions by saying the veteran MP deserved to die as a result of voting for airstrikes on ISIS terrorists in Syria in 2014 and 2015.

Announcing the sentence at the Central Criminal Court at the Old Bailey on April 13, Justice Sweeney said, “The defendant has no remorse or shame for what he has done—quite the reverse.”

He described Amess’s death as a loss “of national significance” and said his murder “struck at the heart of democracy.”

The whole-life sentence means Ali will never be eligible for parole and will likely spend the rest of his days in prison.

Amess’s family, in a statement issued through the Metropolitan Police, said his murder was “beyond evil,” and they felt “no elation” at Ali’s imprisonment.

Ali, who was born into an influential Somali family in London, became self-radicalised in 2014 and dropped out of university, abandoning ambitions for a career in medicine.

The prosecutor said the attack on Amess was “no spur-of-the-moment decision,” as Ali had “for a number of years been determined to carry out an act of domestic terrorism.”

He considered travelling to Syria to fight for the ISIS terrorist group, but by 2019 opted for an attack in the UK.

The terrorist bought a knife six years ago and carried out reconnaissance on targets, including Cabinet Secretary Michael Gove.

By September 2021, Ali had settled on Amess as an easy target after seeing his upcoming meeting with constituents in Leigh-on-Sea on Twitter. He made an appointment through the MP’s office, falsely claiming that he was moving to the area and was interested in churches.

In a police interview, he spoke calmly about his plot and admitted allegiance to the ISIS terrorist group.