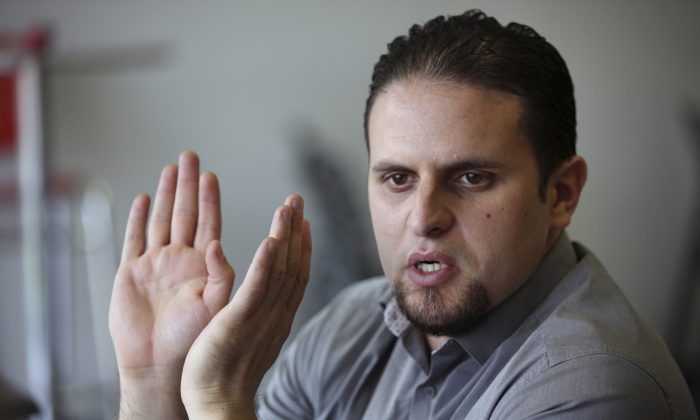 Former Guantanamo detainee and al-Qaida trainee Mourad Benchellali talks during an interview with AP in Gennevilliers, suburban Paris, France, on May 13, 2016. With thousands of young Europeans joining the ranks of radical Islamists in Syria, some people have stepped forward to offer to deter them. But most governments and groups trying to prevent the exodus of vulnerable youths are cautious about accepting such services—since the volunteers were once radicals themselves. (AP Photo/Remy de la Mauviniere)
International

Islamic State’s Lasting Grip Is a New Hurdle for Europe, US

PARIS—The girl, speaking in the lilting accent of southern France, appeared in government ads describing how she was recruited by Islamic State (ISIS) extremists during her quest for religion, then encouraged to quit school and go to Syria, and finally to plot a suicide attack against a synagogue at home.

“I have a hard time even admitting now that I was indoctrinated,” she says to the camera in the ad before breaking down, describing how she tried to recruit others.

The teen, known as Lea, was meant to be the poster child of a nascent program in France aimed at de-radicalizing young people to stem their flow to Syria. But the jihadi rehab didn’t work. Six times she reconnected with the extremists, and six times she called her counselor in tears to apologize.

‘The Sound of God’: In Iraq, US Airpower Bolsters the Peshmerga’s Fight Against ISIS

France’s effort is one of many around the world trying to break the hold Muslim radicals have on their recruits by figuring out what drew them to the groups in the first place. The United States has launched its first formal effort in Minnesota, on the orders of a federal judge. But it’s not clear how effective the programs can be in the long term. France alone has nearly 2,000 people like Lea—about 600 who have left for Syria, but far more who are involved in jihadi networks at home.

Across Europe, an estimated 5,000 people have joined extremist fighters in Syria, and about a third of them have returned. Most, experts and government officials say, will cause no harm.

Dounia Bouzar, who runs France’s jihadi rehab program, works with more than 1,000 young people flagged as potential extremists. Lea’s story, she said, is more the rule than the exception. Islamic State and al-Qaida extremists don’t break off contact just because someone is caught—and the young people themselves have a hard time pulling away from what she described as their “online tribe.”

“A young person who reconnects, that’s normal,” she said. “Monday, they come to bear witness and save others. Wednesday, they denounce someone who wants to leave and say, ‘save him.’ And Friday, they re-connect and threaten your life.”

There is no reasoning with someone in the thrall of a jihadi group, those who run the program say, so the recruits have to experience tangible doubts about the jihadi promises they once believed. Bouzar said that can mean countering a message of anti-materialism by showing them the videos of fighters lounging in fancy villas or sporting watches with an ISIS logo. Or finding someone who has returned from Syria to explain that instead of offering humanitarian aid, the extremists are taking over entire villages, sometimes lacing them with explosives.

Only once doubts are seeded can young would-be jihadis themselves reason their way back to their former selves, she said.

In early 2014, just after turning 18, Abdullahi Mohamud Yusuf applied for a fast-track passport with a vague plan to go to Istanbul. He was stopped at the airport in May 2014, but remained free. He enrolled in community college, got a job, then was arrested in November that year on two terrorism charges for trying to join ISIS. Yusuf, now 20, stayed in a halfway house while his case was pending and remained there after pleading guilty to one count of conspiracy to provide material support to a foreign terrorist organization. He went back to jail after a box cutter was found beneath his bed. His lawyer says his client did not know anything about it.

The program enlists the expertise of Daniel Koehler, a German researcher who works with would-be jihadis and their families. In the U.S., participants are already charged with terrorism offenses, and the goal is to assess their risk of backsliding and give them the tools to keep from slipping back into the networks that once drew them in.

“It’s a form of psychological warfare,” he said before leaving to evaluate the Minnesota suspects.

What neither Koehler nor Bouzar will offer is immunity from charges.

In the case of the Minnesota program, participants are already in the federal justice system. The program is initially being offered to Yusuf and five others who have pleaded guilty to terrorism charges.

In France, Bouzar only deals with people who have not travelled to Syria. Nearly all the jihadis who return from the war zone—mostly voluntarily and numbering around 250—are jailed immediately. This is a sore subject for her, because, as she puts it “we just run after those who have repented” to offer the most persuasive arguments against joining.

“I think the government is afraid of being manipulated,” said Bouzar, who has an annual budget of around 600,000 euros ($676,000). “At the same time, I think for most of those who returned, it’s because they saw the reality and it didn’t correspond to their dreams. There’s nothing better than someone who has escaped Daesh.”

That is why she placed so much hope in Lea’s recovery, even though she knew the risk that Lea would reconnect with recruiters.

One unexpected voice to emerge is that of Mourad Benchellali, a French former Guantanamo inmate cleared of terror links who now lectures to groups of young people throughout France and Belgium, including in Brussels’ Molenbeek neighborhood, home to so many of the Paris and Brussels attackers. Benchellali, who was captured in 2001 after being misled into a trip that landed him in an al-Qaida camp in Afghanistan, recounts his five years of imprisonment without rancor. And it’s the lack of bitterness that may resonate the most.

He has returned to the French prison where he was held after being released from Guantanamo, this time to persuade inmates not to turn to violent extremism. French prisons in particular have been pilloried as breeding grounds for Islamic radicalism. In Molenbeek, he has talked to a population of young people of immigrant backgrounds who feel cut off from mainstream Belgians. He said many in the West just think of violent punishment—beheading, cutting off hands—when they hear about Islamic Sharia law.

“The problem is that reality is more complicated. Sharia is above all a complete system. It’s a political system, a judicial system, an entire system. Everyone has a role to play,” Benchellali said at a recent round table on radicalization. “So they have a real alternative. It’s not just getting married. They’re being offered an entire new life when they arrive. They get a new worth.”

That is especially true for those already caught up in a spiral of crime, unemployment and alienation, said Steve Lambert, a Brussels lawyer linked to jihadi cases.

Carrying out an attack “is an exit strategy by default, after being closed off by all the failures you’ve caused in your life,” Lambert said.

“Nothing is simple and there are no absolutes, but there has to be a solution,” he added. “Every time we harden ourselves, we create new martyrs for the cause.”

Finding out what motivates the slide into violent extremism is crucial to instilling doubts and ultimately changing minds, as is a risk assessment, said Koehler, who has worked directly with several dozen families in six countries.

The French de-radicalization sessions are conducted in rented rooms, the five participants only told the location 10 minutes in advance because, Bouzar said, ISIS recruiters “are hounding them, trying to geo-locate us.” No cellphones are allowed.

In Minnesota, the program started in April with risk evaluations of Yusuf and five others who have pleaded guilty to terror charges. Koehler evaluated their level of engagement in terror activities and chances of relapsing, and the federal judge overseeing their cases will use that information and other factors to determine their sentences. Koehler will also come up with recommendations, such as counseling or mentoring, to keep these men on the right track. The judge could use those recommendations as conditions of the men’s parole—meaning they could be taken back into custody if they don’t follow the program.

In March, U.S. District Judge Michael Davis said the program could also be expanded to other terror defendants, including those being released from prison and re-entering society. The goal is to keep the community safe while helping the young men become productive members of society.

Koehler will also train U.S. probation and pretrial officers, who will be responsible for supervising the defendants once they are out of prison.

But on the minds of law enforcement are cases like that of a young Frenchman known as Abu Oussama, seen in extraordinary hidden camera footage captured by an undercover documentary filmmaker. Flagged to police by his father, detained in Turkey trying to reach Syria, he was imprisoned in France for five months until authorities determined he was no longer a danger, he says.

Yet the young man says he is plotting an attack on his homeland.

“They said since I was de-radicalized, since I was quiet …” he says, giggling toward the camera he cannot see. “It’s all part of the ruse, brother.”