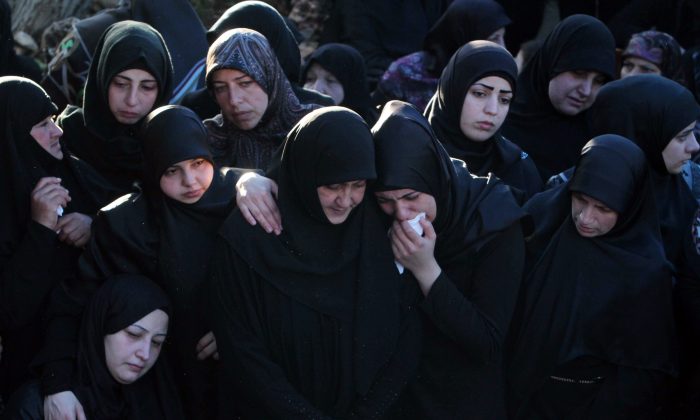 Relatives and friends of Hezbollah member Adel Termos, who was killed in Thursday's twin suicide bombings, mourn during his funeral procession in the southern Lebanese village of Tallousa, Lebanon, on Nov. 13, 2015. (AP Photo/Mohammed Zaatari)
Middle East

Little more than a day before the Paris bomb and gun attacks, Islamic State (ISIS) claimed responsibility for two suicide bombings in Beirut that killed 44 people.

While international media focused on Paris, what coverage there was of the Beirut atrocity described it as an attack on a “Hezbollah stronghold.” This is something of a misinterpretation; the attack wasn’t merely a strike by one terrorist organization against another, but also an indiscriminate bombing designed to cause maximum civilian fatalities. In fact, this was the deadliest attack since the end of Lebanon’s civil war—which led to 144,000 deaths—in 1990.

In its statement of responsibility, ISIS said that the Beirut attack was a sectarian strike, intended to kill Shiites.

In its statement of responsibility, ISIS said that the attack was a sectarian strike, intended to kill Shiites. Yet this working-class district of Beirut also contains Christian, Syrian, and Palestinian communities. Certainly, these bombings are part of a new wave of attacks recently co-ordinated by ISIS and its allies against perceived enemies.

This particular attack clearly was also meant to exploit the divisions that have carved up Lebanon’s post-civil war politics, and are now threatening to tear the country apart.

Iran’s Battleship on the Mediterranean

Lebanon is struggling with a fragmented and dysfunctional political system, and is trapped as a pawn in a geopolitical proxy war in the Middle East.

On the one hand, Lebanon has become a battleground for political control between Iran and Saudi Arabia. Iran heavily funds and supports Hezbollah, the Lebanese Shiite political party and terrorist faction. Hezbollah is accused of being little more than Iran’s “battleship on the Mediterranean,” a key player in Iran’s ambition to create a “Shia crescent,” stretching from Iran across Lebanon, Iraq and Syria to Bahrain and Yemen.

Hezbollah is accused of being little more than Iran’s ‘battleship on the Mediterranean,’ a key player in Iran’s ambition to create a ‘Shia crescent.’

Certainly, Iran has pressed Hezbollah into service in Syria to fight as part of al-Assad’s beleaguered regime, which it supports. Hezbollah’s actions in Syria have been decisive in bolstering al-Assad’s weak grip on territory, and ISIS’s Beirut attack is part of an attempt to hit Hezbollah at home by targeting the Shia population Hezbollah proclaims to defend.

On the other hand, Lebanese politics are increasingly polarized by Shiite-Sunni division. Hezbollah, which emerged during Israel’s 1992 invasion of Lebanon, has grown from a militant “resistance movement” into a major political party that is currently the leading representative of Lebanon’s Shiite population.

While the Shiite of Lebanon were once an oppressed minority, Hezbollah is now a powerful political party with executive veto power in Lebanese politics. The Shiite population is also the fastest growing in Lebanon and is now estimated to be the largest group in the state.

In opposition to Hezbollah is the Sunni bloc now gathered together under the Future Movement, a party with close financial and strategic links to Saudi Arabia and its own regional schemes.

In opposition to Hezbollah is the Sunni bloc now gathered together under the Future Movement, a party with close financial and strategic links to Saudi Arabia and its own regional schemes. The Future Movement is solidly opposed to what they see as a Hezbollah (and by extension Iranian) gambit to take control of Lebanon.

Notably, while the Christian population once dominated the state’s institutions, it is now politically divided, with parties associated with either Hezbollah or the Future Movement.

As Lebanon is polarized between the two factions and their external backers, the government system designed to share power between the state’s various parties displays increasing fragility and stalemate. As things stand, 23 parliamentary sessions have failed to elect a new president, the Parliament has been unable to pass a budget for more than a decade, and parliamentary elections have been delayed. Political appointments for the head of the military, central bank, and judiciary—positions allocated on a sectarian basis—are long overdue.

Paris: The War With ISIS Enters a New Stage

Then there was the saga of the 20,000 tons of garbage that gathered uncollected on Beirut’s streets over the summer as the power-sharing government could not agree on a policy to remove it. The crisis brought thousands of protesters to the city’s streets, demanding the government’s resignation.

The war in neighboring Syria has only added to the volatility—as parties take pro- or anti-Assad positions. Lebanon, a state roughly the size of Wales, also currently hosts more than 1 million Syrian refugees.

The Message Jihadi John’s Death Sends to Other Jihadists

Sensing these weaknesses, ISIS and other Islamic extremists based in Syria have already struck Lebanon with a number of attacks. In August 2014, for example, Nusra Front and ISIS terrorists clashed in Arsal, a Lebanese border town, where they killed and kidnapped a number of Lebanese security force members.

And as long as Lebanon’s political gridlock obstructs a solution to the country’s terrible problems, ISIS will seek to destabilize the situation further.

John Nagle is a lecturer in sociology at the University of Aberdeen in the U.K. This article was previously published on TheConversation.com