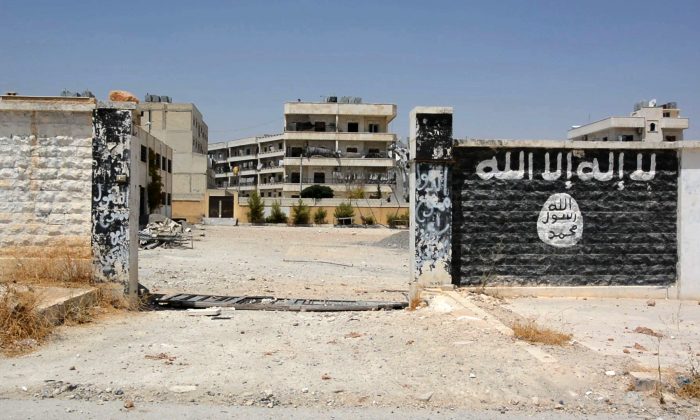 An image grab taken from an AFP video dated from Aug. 12, 2016 shows a school that was used by Islamic State's fighters to manufacture explosives in the northern Syrian town of Manbij, almost a week after the Syrian Democratic Forces (SDF), a coalition of Arab and Kurd fighters, seized the group's stronghold. (STR/AFP/Getty Images)
Middle East

The Islamic State’s loss of the northern Syrian town of Manbij to U.S.-backed fighters marks the latest in a string of defeats for the extremists across their self-styled caliphate in Syria and Iraq.

The strategic town, which lies on a supply route between the Turkish border and the de facto ISIS capital, Raqqa, fell to the Kurdish-led Syria Democratic Forces on Friday after more than two months of heavy fighting and U.S.-led airstrikes. The Britain-based Syrian Observatory for Human Rights says the fighting claimed more than 1,700 lives, including more than 400 civilians.

ISIS still controls large areas of Syria as well as Iraq’s second largest city, Mosul. It has also claimed major terrorist attacks in recent months, including the Orlando shooting, the Nice truck attack, and a Baghdad bombing that killed some 300 people.

But Lt. Gen. Sean MacFarland, the top U.S. commander for the fight against ISIS, said this week that some 45,000 ISIS militants have been removed from the battlefield, reducing the group’s total numbers to as few as 15,000.

Here is a look at ISIS’s recent territorial setbacks.

Iraqi forces captured Fallujah in late June after a five-week offensive. Fallujah is just an hour’s drive west of Baghdad, and in early 2014 became the first Iraqi city to fall to ISIS. The Sunni city was an insurgent stronghold following the 2003 U.S.-led invasion, and more than 100 American soldiers were killed in house-by-house fighting there in 2004.

Syrian government forces aided by Russian airstrikes drove ISIS out of Palmyra, an eastern oasis town known for its stunning Roman-era ruins, in March. During their 10-month reign, the extremists destroyed 2,000-year-old temples and other monuments in the town’s UNESCO world heritage site, once one of Syria’s main tourist attractions. The extremists view such ancient ruins as monuments to idolatry.

Iraq declared the capital of its western Anbar province “fully liberated” in February after months of fighting. As in Fallujah, Iraqi forces laid siege to the city and then gradually pushed in with the aid of heavy U.S. airstrikes. The battle to recapture Ramadi destroyed much of the city, and most of its residents have yet to return home.

The SDF captured some 2,400 square kilometers (927 square miles) of territory from ISIS in northern Syria in February alone, including the strategic town of Shaddadeh, on the main road linking Raqqa and Mosul. The strip of territory along the Turkish border had been used to bring in supplies and foreign fighters.

Iraqi and Syrian Kurdish forces pushed ISIS out of Sinjar, west of Mosul, in November 2015 with the help of a U.S.-led air campaign. When ISIS overran the town in 2014, the extremists killed and enslaved thousands of members of Iraq’s Yazidi religious minority. The recapture of the town severed a major supply route between ISIS-ruled territories in Iraq and Syria.

Syrian Kurdish forces captured the northern Syrian town of Tal Abyad in July 2015, handing the extremist group its biggest loss in Syria since the establishment of its self-proclaimed caliphate the year before. The loss of Tal Abyad severed the most direct supply route from the Turkish border to Raqqa, forcing ISIS to rely on a narrow belt of territory further west, including Manbij.

The Libyan city of Sirte, seized by a powerful ISIS affiliate last year, was once seen as a fallback option for the extremist group if it were ever defeated in Iraq and Syria. But Libyan forces launched an offensive to retake Sirte in June, and earlier this week captured a number of strategic locations with the aid of U.S. airstrikes. Officials say the city is now 70 percent liberated.