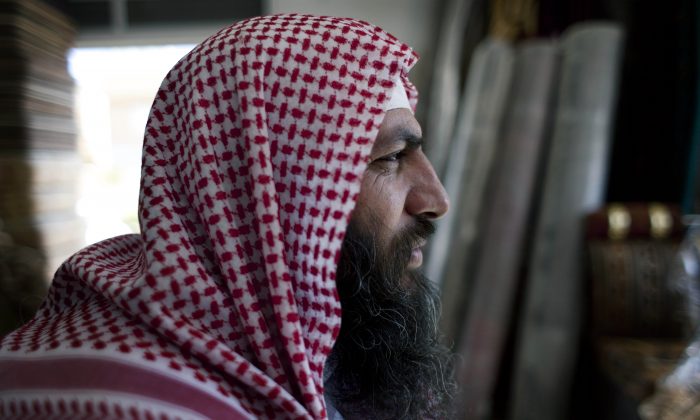 Salafi cleric Mohammed al-Shalabi, 48, widely known as Abu Sayyaf, talks during an interview with the Associated Press at a furniture store, owned by the head of Abu Sayyaf's clan, in the city of Ma'an, Jordan, on Oct. 29, 2014. Local authorities quickly stripped away public signs of support for the Islamic State group in this desert town. Black flags have been removed from rooftops. Graffiti proclaiming the extremists imminent victory have been whitewashed. But supporters of the Middle Easts most radical extremist group are only laying low. (AP Photo/Nasser Nasser)
Middle East

MAAN, Jordan—Local authorities quickly stripped away public signs of support for the Islamic State group in this desert town. Black flags have been removed from rooftops. Graffiti proclaiming the extremists’ imminent victory have been whitewashed.

But supporters of the Middle East’s most radical extremist group are only laying low after their surprise show of strength in protests last summer. Despite government efforts, support for the Islamic State group is growing in Maan and elsewhere in Jordan, one of the West’s key allies in the region, say Islamic State activists, members of rival groups and experts on political Islam.

One of the leading Islamic State group activists in Maan said he and others are still working to build their base.

“In homes, at work, in mosques, in the streets, we reach out to people to call them to the real Islam,” the 40-year-old blacksmith, Abu Abdullah, told The Associated Press. Like other Islamic State group supporters interviewed by the AP, he spoke on condition he be identified only by his nickname for fear of troubles with authorities.

Militants like Abu Abdullah talk confidently of eventually having enough numbers to make their takeover of Jordan inevitable.

That may be overconfidence. Hardcore supporters of the Islamic State group’s self-proclaimed “caliphate” likely number in the thousands in a nation of 6.5 million. The government says the threat is overblown. But extremists do have momentum, attracting followers with promises of radical change and an ostensibly more just society at a time when many Jordanians can’t find jobs, struggle with rising prices or feel abandoned by the pro-Western ruling elite.

The war in Syria gives them a cause and battlefield experience. Up to 2,000 Jordanians are fighting in rebel ranks in Syria and Iraq, most of them with extremist factions, and several hundred have been killed, according to Hassan Abu Haniyeh, an expert on Islamic movements, and Marwan Shehadeh, a scholar who was once part of the ultraconservative Salafi movement.

Over the summer, jihadi Salafi marches were held in Maan, Zarqa and several other cities, with protesters raising black banners and chanting slogans in support of the Islamic State group.

Given the poverty and anger at perceived government neglect, such protests could easily erupt again and spread, warned Maan’s mayor, Majed al-Sharari.

“My expectation is that because of this pressure, there will be a huge explosion in Jordan,” he said. “I don’t expect 2015 to pass peacefully. The signs are there.”

Jordan’s King Abdullah II called the fight against the Islamic State group and extremists “a third world war by other means.”

“This is our war. This is a war inside of Islam,” he said in an interview with CBS News on Friday ahead of White House talks with President Barack Obama. “We have to own up it. We have to take the lead.”

Support for the Islamic State group runs strongest among jihadi Salafis. The jihadi Salafi movement backs the waging of violence — holy war, as they portray it — to bring about rule by the strict version of Islamic Shariah law that they contend is the only acceptable interpretation.

Experts estimate that the number of Jordan’s jihadi Salafis has doubled since the 2011 outbreak of the Arab Spring uprisings, to at least 9,000 hardcore members.

They are part of the broader movement of Salafis, who number in the tens of thousands around Jordan. The vast majority in the movement opposes the jihadi branch and says preaching, not violence, is the way to spread their vision of Islam.

While they used to be focused in a few towns, “now you find jihadists everywhere in the kingdom,” said Abu Haniyeh. They have increasingly turned to support for the Islamic State group since Jordan became part of a U.S.-led coalition waging airstrikes against the group in Syria and Iraq, he said.

They are also drawing from the ranks of the Muslim Brotherhood, once the region’s most influential political Islamic movement. In Maan, jihadi Salafis are surpassing the Brotherhood in membership, said Ibrahim al-Hmeidi, a local school supervisor.

“There is a tangible increase in the number of supporters in the street,” said Morad Adeili, spokesman of the Jordan branch of the Brotherhood. “People lost hope, particularly the young, and they feel the Salafi ideology and enterprise will give them what they want.”

Maan, a tribal town of 60,000 in the deserts of southern Jordan, embodies the challenges. Unemployment in the province was 15 percent in 2013, compared to 12.6 percent nationally. Unemployment among those in their 20s is believed to be close to 30 percent.

Maan “has been marginalized for a long time by successive governments and there is real economic suffering,” said the mayor, al-Sharari. “All we hear are promises and talk, but no real steps.”

Dozens of Maan residents have gone to Syria or Iraq to fight in jihadi groups and at least 18 have been killed, according to Abu Abdullah, the Islamic State activist.

The show of IS support in Maan erupted in late June and early July, as Islamic State leader Abu Bakr al-Baghdadi declared a caliphate in the territory his group controls in Iraq and Syria. Pro-IS banners were hung from a two-story bank building in Maan that had been torched by rioters in April. “The Islamic caliphate is scoring victories,” read one sign.

The announcement had jihadi Salafis in Maan at the time buzzing with excitement.

“The caliphate has become a reality on the ground and it will come here, sooner or later,” said Abu Mohammed, who volunteers at the Sabeel Center, a local charity run by Salafis.

Another volunteer, 30-year-old Abu Ramez, said he hoped a caliphate will bring social justice. “We have two classes, the large poor one and the small rich one. Therefore, people support IS.”

By late October, the flags were gone and most of the slogans whitewashed, under orders from the mayor.

But Abu Abdullah is undiscouraged. He said he expects Jordan to come under the control of the Islamic State group soon, with or without a fight.

“We are waiting for this moment,” he said, sporting an untrimmed black beard, black headscarf and robe ending above the ankle, typical garb for Salafis.

Salafis are deeply intertwined in the conservative town and with its tribes, which hold powerful influence.

On a recent morning, for example, Mohammed al-Shalabi, a leading jihadi Salafi preacher widely known as Abu Sayyaf, had a casual get-together with senior tribal members to socialize and chat about the upcoming wedding of Abu Sayyaf’s eldest son. They met at a furniture store owned by the head of Abu Sayyaf’s clan.

The town’s hundreds of Salafis are embraced by other members of their tribes, said Fayez Bazaya, one of the tribal leaders who attended. “When they (Salafis) face a problem, of course the tribe stands against the outsider.”

Since the summer, the government has been reining in the pro-Islamic State fringe.

More than 120 have been arrested for support of the group the past three months. At least 16 have been sentenced to prison, including a man sentenced last week to three years in prison for “spreading terrorist ideology” by posting pro-Islamic State slogans on the Internet.

In the tough new climate, the Brotherhood also appears to be a target. Its deputy leader in Jordan was detained last months amid allegations he had harmed Jordan’s relations with a friendly nation, a spokesman for the group said.

The flow of volunteer fighters to Syria and Iraq has also slowed because of tighter border restrictions, said Abu Abdullah.

“There is a huge exaggeration on the phenomena of extremism in Jordan,” he said. “We are talking about a small phenomenon that is under control.”

He acknowledged economic problems in Maan and other provincial towns but said the “mass majority of Jordanians don’t associate with fundamentalism as an ideology and with terrorism in general.”

After the rapid Islamic State gains in Iraq over the summer, there has been speculation it might target Jordan next, either through cross-border attacks or by trying to destabilize it from within. But the group also must take into account the likely strong response the U.S. would marshal to protect its ally.

Shehadeh said that for now, IS supporters see Jordan as “a land of logistical support and preaching, and it is not the land of the fight yet.”

Abu Sayyaf said it’s not the time for the Salafis to make their move. “The Salafis can change the country when they have power,” he said. “When they are weak, they cannot.”

From The Associated Press. AP writer Omar Akour in Amman, Jordan, contributed to this report.