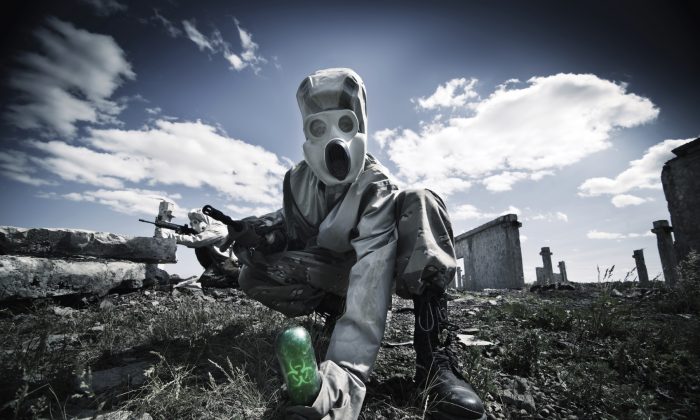 ISIS’s Next Attack Could Be With Chemical Weapons

Earlier this month, Morocco’s head of counterterrorism, Abdelhak Khiame, warned that the Islamic State (ISIS) is trying to build chemical weapons to use in an attack on Europe. The announcement comes after Moroccan authorities in February discovered components for making a chemical weapon during a raid on an ISIS cell poised for an attack in Morocco.

Moroccan authorities in February discovered components for making a chemical weapon during a raid on an ISIS cell.

Khiame was not exaggerating the risk to Europe, as ISIS has the desire, and is working hard to develop the capability, to pull off such an attack. The recent terror strikes in Paris and Brussels demonstrated ISIS’s ability to infiltrate trained terrorists into Europe, and revealed the extent of terror networks embedded across the continent.

An important part of ISIS’s brand is that it is the most ostentatiously brutal of all terror groups, so a chemical attack also has appeal, as it would inspire particular fear and revulsion. In fact, ISIS has already perpetrated chemical attacks in Iraq and northern Syria. Iraqi intelligence officials claim that the group even has a unit focused on researching and building chemical weapons.

Fortunately, ISIS has not been able to realize its chemical ambitions outside Iraq and Syria yet, but it is sure to continue trying. Morocco’s success in breaking up the ISIS cell in February—one of 25 terror plots it claims it has foiled recently—and its broader efforts against terrorism offer some lessons for how counterterror officials in the United States and Europe can make it more difficult for ISIS to carry out such an attack.

In 2003, Morocco suffered a triple suicide bombing that killed 45. The country responded by developing a multipronged program to counter Islamist terrorism that included judicial, security, and even economic initiatives, earning the praise of the U.S. State Department for its holistic approach.

Morocco cooperates well with its neighbors—with the exception of long-time antagonist Algeria—and with the West on security matters, leading the United States to designate it a major non-NATO ally, one of only three African countries to be so recognized.

A crucial component of the Moroccans’ fight against terrorism is its efforts to combat the radical Islamist ideology that animates groups like ISIS. The Moroccan government propagates a moderate interpretation of Islam that emphasizes tolerance for other belief systems through a training program for imams from around the world, a dedicated television channel, and an annual lecture series hosted by King Mohammed VI during Ramadan.

Morocco’s efforts have not been foolproof. Fifteen hundred of its citizens have joined ISIS (around 275 of whom have returned to the country). Its government also struggles to find the balance between aggressive counterterrorism and protecting the rights of its citizens. It has taken steps toward a freer society, but rights for many are still too constrained.

How Big a Threat Is ISIS in Central Asia?

Explainer: What Is a Dirty Bomb and How Dangerous Is It?

Yet allies like Morocco are a critical part of the fight against a vicious terrorist group and deserve American support. A large majority of Americans agree. In findings from a recent Heritage Foundation market research poll, 80 percent of those polled said the United States has a responsibility to escalate its response to terrorists when they strike an ally.

ISIS’s desire to use chemical weapons against American allies—and likely the United States itself—and Morocco’s efforts to stymie ISIS’s plans are yet another reminder of the need for vigilance and determination in the fight against terror and of the value of our partners in what will be a long battle.

Joshua Meservey is a policy analyst for Africa and the Middle East within the Douglas and Sarah Allison Center for Foreign and National Security Policy at The Heritage Foundation. Copyright The Daily Signal. This article was previously published on The Daily Signal.