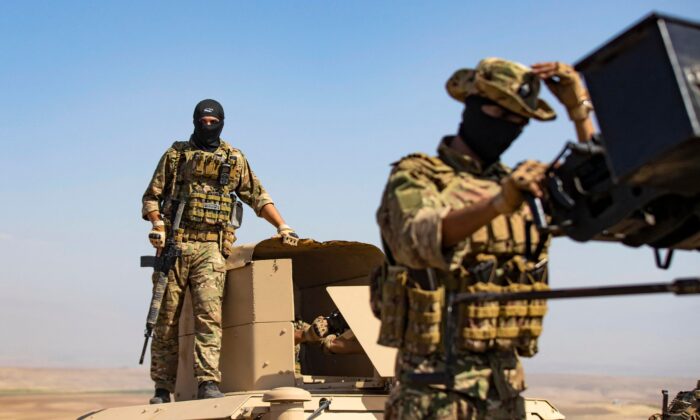 A fighter of the Syrian Democratic Forces (SDF) stands atop a Humvee during a joint military exercise with forces of the U.S.-led "Combined Joint Task Force-Operation Inherent Resolve" coalition against the ISIS group in the countryside of the town of al-Malikiya (Derik in Kurdish) in Syria's northeastern Hasakah province on Sept. 7, 2022. (Delil Souleiman/AFP via Getty Images)
Middle East

BEIRUT—The ISIS terrorist group killed six U.S.-backed Syrian fighters in eastern Syria saying on Monday that the killing was in retaliation for an ongoing operation inside a sprawling camp housing tens of thousands of family members of the extremist group.

The ISIS-linked Aamaq news agency released a video showing the shooting of the six members of the Kurdish-led Syrian Democratic Forces near the eastern village of Ruwaished where they were captured alive and later shot dead late Sunday.

Despite their defeat in Syria in 2019, when ISIS lost the last sliver of land its fighters once controlled, the extremists’ sleepers cells have continued to carry out deadly attacks in Syria and Iraq where they once held large parts of the two countries.

The latest attack occurred in Syria’s eastern province of Deir el-Zour bordering Iraq, and where U.S. troops are based at an oil facility known as the Omar Field.

Last week, the U.S. military said SDF fighters arrested dozens of ISIS terrorists and rescued four women who were being held chained inside tents at the massive al-Hol camp that houses ISIS families.

The operation that has been ongoing for three weeks is part of an effort to dissolve a major ISIS network at the camp, which is widely seen as a breeding ground for the next generation of ISIS extremists.

The al-Hol camp in Syria’s northeastern Hassakeh Province, has long been viewed as a growing problem and there have been a number of military operations and raids there to root out ISIS threats.

Some 50,000 Syrians and Iraqis are crowded into tents in the fenced-in camp. Nearly 20,000 of them are children; most of the rest are women, the wives and widows of ISIS fighters. In a separate, heavily guarded section of the camp known as the annex are an additional 2,000 women from 57 other countries—they are considered the most die-hard ISIS supporters—along with their children, numbering about 8,000.