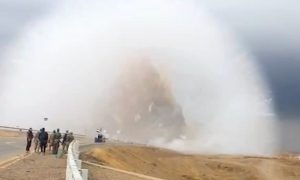 The Islamic State, or ISIS, has celebrated the shootings and bombings around Paris that left dozens of people dead. According to AFP, the latest death count is well over 100 after it was discovered that gunmen killed dozens inside of the Bataclan theater.

According to Fox News and Sky News, one of the arrested suspects told French police: “I am from ISIS.” AFP later reported a witness said one of the Paris attackers mentioned French military action in Syria.

They were using the hashtag #PARISBURNS, gloating over the violence. However, it’s unclear if ISIS has claimed responsibility for the attacks.

One ISIS supporter wrote, “O crusaders we are coming to you. With bombs and rifles. Wait for us.” That Twitter account was suspended.

But according to Vocativ, ISIS “has not” taken responsibility for the attacks.

“The infidels were happy in the liberating of Sinjar at the morning, and at night they slap themselves for Paris,” said one tweet, according to the website. “The west used to live quietly and set fire in the Muslim lands with war, but after the emergence of the caliphate [ISIS] the game has changed,” another wrote, according to a translation.

The violence has reportedly killed more than 100 people in several different attacks around the capital.

A police union official told The Telegraph that there there were two suicide attacks and a bombing near the national stadium as France and Germany were playing a soccer match.

The official, identified as Gregory Goupil of the Alliance Police Nationale said there were at least three dead in the attacks near the stadium.

He said the explosions went off at the same time, but he did not provide more details.

“It’s horrific,” one police official was quoted as saying.

“Operations are still unfolding, there’s a police assault at the moment in Paris. We are mobilizing all the police force possible to neutralise the terrorists.”

President Hollande said in a televised statement of  the attacks: “We have mobilized all available forces to neutralize the terrorists.” The military was deployed, the borders of France were closed down, and a state of emergency was declared. He said security forces are assaulting a site in Paris after the attacks.

This is terrible. You can hear the explosion outside the stadium. #PrayForParis https://t.co/YTuR3QJf1r