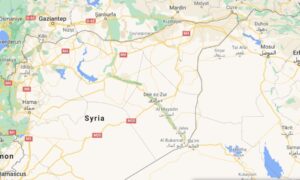 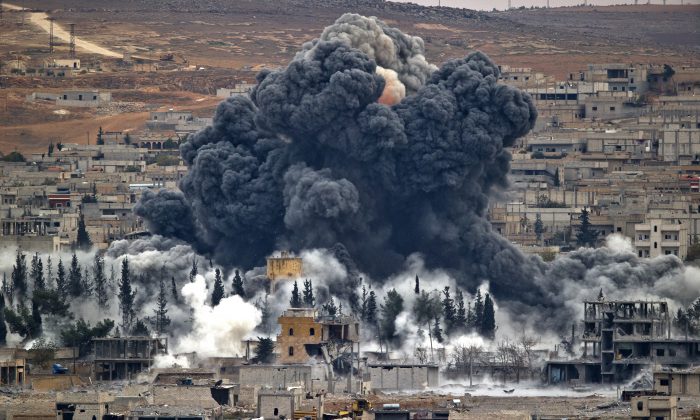 Smoke rises from the Syrian city of Kobani, following an airstrike by the U.S.-led coalition, seen from a hilltop outside Suruc, on the Turkey-Syria border, on Nov. 17, 2014. After months of losing ground in Iraq and Syria, the Islamic State is showing signs of the wear and tear, with commanders on the ground saying they are seeing an increase in desertions. But the jihadis appear to be lashing back with more terrorist and chemical attacks. (AP Photo/Vadim Ghirda)
Middle East

BAGHDAD—After months of losing ground in Iraq and Syria, the Islamic State (ISIS) is showing signs of wear and tear, and its opponents say they have seen an increase in desertions among the extremists. But the jihadis appear to be lashing back with more terrorist and chemical attacks.

Under a stepped-up campaign of U.S.-led and Russian airstrikes, as well as ground assaults by multiple forces in each country, the jihadis are estimated to have lost about 40 percent of their territory in Iraq and more than 20 percent in Syria. At their highest point in the summer of 2014, the group had overrun nearly a third of each country, declaring a “caliphate” spanning from northwestern Syria to the outskirts of Baghdad.

At that time, the extremists were riding high, known for their courage, experience, readiness to die and brutality. Now, those battling them on the ground say they appear to be flagging.

What we are witnessing is that Daesh are not as determined as they used to be.
— Lt. Col. Fares al-Bayoush, commander of a Syrian rebel faction

“What we are witnessing is that Daesh are not as determined as they used to be,” Lt. Col. Fares al-Bayoush, commander of a Syrian rebel faction, said, using an Arabic acronym to refer to ISIS. His 1,300-strong Fursan al-Haq Brigade has been fighting against ISIS and Syrian government forces for more than a year.

“Now there are members who surrender, there are some who defect. In the past they used to come blow themselves up,” he said.

A Palestinian-American member of ISIS recently gave himself up to Kurdish forces in northern Iraq, but so far, the reports of desertions are mostly anecdotal. Brett McGurk, President Barack Obama’s envoy to the U.S.-led coalition fighting ISIS, said this week at a conference in northern Iraq that ISIS desertions have increased recently and more are expected, but he did not provide figures.

Clint Watts, a fellow at the Foreign Policy Research Institute, said ISIS is experiencing a phenomenon he’s witnessed in other extremist groups that begin to lose territory.

“You’ve seen more and more reports of defectors just broadly, and you’ve also seen more reports of internal killings of so-called spies,” Watts said. “As they lose ground and retract you start to see these fractures emerge in the organization.”

The ISIS setbacks began over a year ago, when the fighters were forced out of the northern Syrian Kurdish town of Kobani by local Kurdish forces backed by U.S.-led airstrikes.

In December, the predominantly Kurdish U.S.-backed Syrian Democratic Forces, or SDF, under cover of intense coalition airstrikes seized the Tishrin Dam, which supplies much of northern Syria with electricity. In the weeks that followed the forces gained control of more areas.

In all of 2015, the jihadis lost 14 percent of their territory in Syria, according to IHS, an analysis group that monitors the conflict. In the past three months, they lost another eight percent, a sign that the erosion is accelerating. The IHS figure roughly matches an estimate of a 20 percent loss given this week by U.S. Secretary of State John Kerry.

In February alone, the SDF said it captured 2,400 square kilometers (927 square miles) consisting of 315 villages including the ISIS stronghold of Shaddadeh, on the main road linking the Iraqi city of Mosul and the Syrian city of Raqqa, the de facto capital of the “caliphate.” SDF spokesman Col. Talal Sillo said the command will meet soon to plan for another offensive in northern Syria.

In Iraq, ISIS territorial losses have been more gradual. Coalition airstrikes have cleared the way for ground forces to reclaim towns and cities from Sinjar in the country’s north to Ramadi in the west. The coalition estimates that between the launch of the air campaign in August 2014 and January 2016, ISIS has lost between 21,000-24,000 square kilometers (8,100-9,200 square miles), about 40 percent of the Iraqi territory it once held.

Calls for a stepped-up campaign intensified after ISIS claimed responsibility for the Nov. 13 Paris attacks that left 130 dead and the Oct. 31 downing of a Russian jetliner from the Egyptian beach resort of Sharm el-Sheikh, which killed all 224 on board.

Deadly attacks in Turkey by ISIS that killed scores of people also spurred Ankara to tighten its closure of the border, making it difficult for the extremists to cross into Syria.

In an effort to squeeze the group’s finances, coalition and Russian warplanes in Syria began increasingly targeting ISIS oil assets in November. ISIS has since had to cut salaries and benefits for fighters.

The United States estimates that as of last month, ISIS fields 19,000 to 25,000 fighters in Iraq and Syria—down from an estimated 20,000 to 31,500—a number that was based on intelligence reports from May to August 2014. A U.S. official said the decrease reflects the combined effects of battlefield deaths, desertions, internal disciplinary actions, recruiting shortfalls and difficulties that foreign fighters face traveling to Syria.

Still, these developments do not necessarily make ISIS less of a threat.

In both Syria and Iraq, ISIS has launched some of its deadliest suicide attacks in recent weeks as well as a number of chemical weapons attacks. On Feb. 22, a triple suicide bombing in a Shiite suburb of the Syrian capital killed at least 83 people and wounded more than a hundred. In neighboring Iraq, a suicide truck bombing south of Baghdad killed 61 and wounded 95. In the northern Iraqi town of Taza, an ISIS chemical weapons attack last week killed one person and wounded more than 600.

ISIS also launched a coordinated assault on the northern Syrian border town of Tal Abyad and nearby villages. In days of fighting, 47 SDF fighters and 140 militants were killed, according to the Britain-based Syrian Observatory for Human Rights, an opposition activist group that tracks all sides of the conflict.

Watts said that if ISIS can’t use battlefield victories to rally its supporters, it will turn to terrorist attacks.

“In terms of being a conventional army that can take territory, they are less dangerous,” Watts said. “But if your worry is regional and international terrorism they’re going to be more dangerous.”