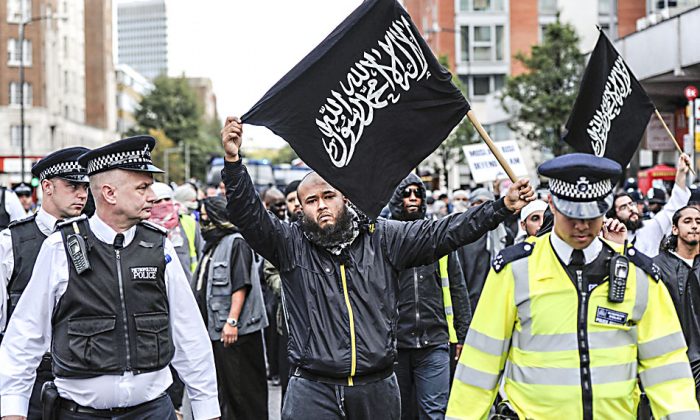 Police escort Islamist demonstrator marching to protest outside the US embassy in London before a ceremony to mark the 10th anniversary of the 9/11 attacks on the United States on Sept. 11, 2011. Around 50 people brandished anti-US banners, chanted slogans and burnt a small piece of paper with a picture of the US flag on it. (CARL COURT/AFP/Getty Images)
International

BIRMINGHAM, England—Self-starter ISIS strategies could be evolving to be customized country by country in Europe, targeting the hated “gray zone” where Muslims live in secular democracies.

ISIS is fundamentally different from al-Qaeda because it is essentially a “self-starter” model, he said. With al-Qaeda, terrorist cells have to go through a command structure. “ISIS says the jihad starts with you.”

Fraser-Rahim has studied the tactics of Islamic extremists for 15 years. “The strategy is purposeful and could be evolving.” The recent spate of ISIS terrorist attacks in Europe is part of that strategy.

In its propaganda magazine in 2015, ISIS stated that the “gray zone” of Muslims living under Western democracies in Europe must be destroyed.

Some counter-terrorists now think that ISIS may be adjusting its gray zone strategy with extremist messages and tactics tailored to different countries.

“The ‘gray zone,’ as conceived by ISIS propagandists, is the open and pluralistic space in which moderate Muslims and non-Muslims peaceably co-exist,” said Simon Cottee, author of “The Apostates: When Muslims Leave Islam,” in an email.

“ISIS aims to destroy that space, create polarization among Muslims and non-Muslims, and recruit from those who feel they have no place in the secular, liberal West.”

That report said France had been specifically targeted for being a symbol of Western secular democracies and values.

“ISIS uses slick videos. If al-Qaeda was Blackberry, then Daesh is iPhone 7—they are quite the millennial organization. They are like a tech startup,” he said.

In the last two years, a rash of communications companies have sprung up offering counter-extremist narratives, videos, communications strategies, and campaigns tailored to counter specific threats with the support of increased public funding.

“There is a sort of cottage industry that is emerging,” he said. As to whether they are effective, the jury is still out, he said.

‘We Want to Learn’: Iraqi Girls Back at School After Years Under ISIS

The U.S. public and some politicians don’t understand the situation in Europe, he said. “The average American will look at it and say they are all the same.” The easy fix of simply applying the American model to Europe doesn’t work, he said.

According to Europol, most of the Islamic terrorists (including those returning from conflict) have been self-radicalized in a short period of time and are hard to detect.

Refugees from the conflict zones are a target of radicalization, from the time they are in refugee camps, until after they reach their final destination. The ISIS group recruits fighters with the promise of paying for their passage to Europe.

Understanding that ISIS has an explicit strategy for sowing discord in the gray zone doesn’t mean treading on eggshells, says Cottee.

He said the “conventional liberal wisdom on ISIS” misrepresents the situation by suggesting anything the West does in response to ISIS, from bombing it in Syria to comedy sketches making fun of jihadi brides, will offend Muslims and push them into the arms of ISIS.

“I think that’s hugely simplifying because it gives way too much power to ISIS, and to Western governments. ISIS can’t bomb and terrify the West into deserting the ‘gray zone’ just like that—it’s not so easy, because we’re talking about large numbers of citizens who just can’t be coerced in that way.”