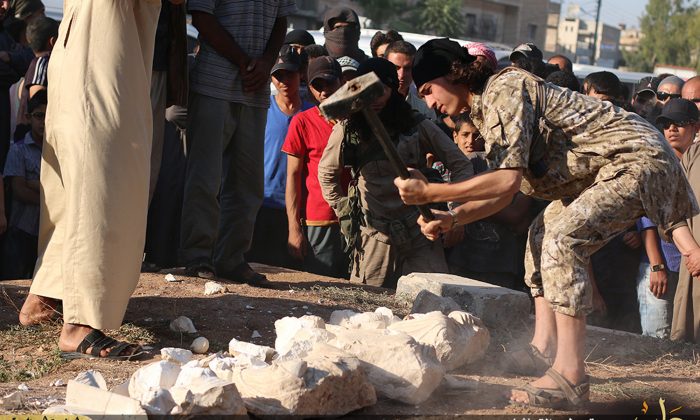 In this image posted on a militant website by the Aleppo branch of the Islamic State group on Friday, July 3, 2015, which has been verified and is consistent with other AP reporting, a militant smashes items that the group claims are smuggled archaeological pieces from the historic central town of Palmyra, Syria. (Militant website via AP)
Middle East

BEIRUT—The ISIS group says it has destroyed six archaeological pieces from the historic town of Palmyra that were confiscated from a smuggler.

An ISIS statement says the six busts were found when the smuggler was stopped at a checkpoint. The issue was referred to an Islamic court, which ordered that they be destroyed and the man be whipped.

Photographs released by the group showed IS fighters destroying the busts with large hammers.

The Britain-based Syrian Observatory for Human Rights said on Friday it was unclear if the busts were authentic or if the militants destroyed fake busts as a cover for the ISIS group’s own antiquities smuggling.