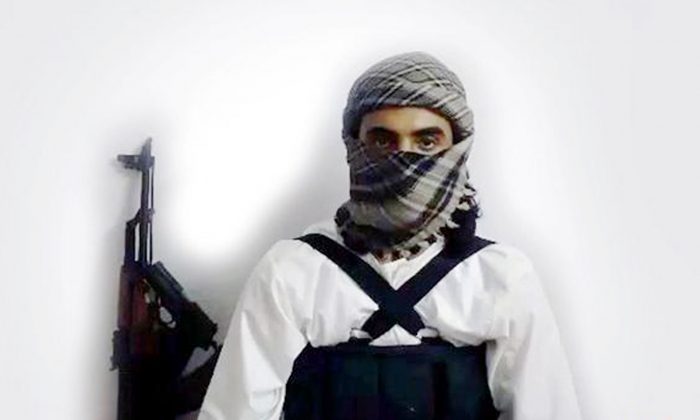 This file image taken from a militant website associated with Islamic State extremists, posted Saturday, May 23, 2015, purports to show a suicide bomber, with the Arabic bar below reading: "Urgent: The heroic martyr Abu Amer al-Najdi, the attacker of the (Shiite) temple in Qatif", which the Islamic State group's radio station claimed responsibility for. (Militant photo via AP)
International

PARIS—After a selection of tunes, the presenter with an American accent offers “a glimpse at our main headlines.” ISIS extremists have just seized three Iraqi cities. A bomb blows up a factory, killing everyone inside. Extremists destroy four enemy Hummers and an armored vehicle.

The newscast’s tone sounds much like National Public Radio in the United States. But this is Al-Bayan, the ISIS radio targeting European recruits — touting recent triumphs in the campaign to carve out a Caliphate.

All news is good news for Al-Bayan’s “soldiers of the Caliphate.” In this narrative, the enemy always flees in disgrace or is killed. The broadcasts end with a swell of music and a gentle English message: “We thank our listeners for tuning in.”

The tension between the smooth, Western-style production and the extremist content shows how far the hardcore Islamic propaganda machine has come since 2012, when an aging Frenchman posed in front of a black-and-white jihadi flag and threatened France in the name of al-Qaida in the Islamic Maghreb.

The footage was grainy, with minimal production values, and released on a relatively obscure regional website. By contrast, Al-Bayan reaches thousands of listeners every day via links shared on social networks, helping to swell the ranks of Westerners — projected this year to reach a total of up to 10,000 — fighting for the ISIS in Syria and Iraq.

In the time it took to bring the Frenchman Gilles Le Guen to trial, his European successors in violent jihad have overturned the recruitment script in ways that might impress a New York PR agency.

A typical week of recruitment now includes multiple newscasts in three languages, except the “good news” is about suicide attacks instead of traffic reports and baseball scores.

A polished video directed at French recruits shows trainees leaping through burning hoops and swinging across monkey bars over flames. Multilingual blog posts by jihadis urge people to follow them. And a metastasizing network of tweets spills forth from the smartphones of armchair cheerleaders.

Cameramen themselves are heroes in this information war: Media, an unnamed fighter says in a video dedicated to these PR muhajedeen, is “half of the battle, if not its majority.”

An April video calling for doctors to join ISIS shows physicians in immaculate scrubs, as well as clean and functioning medical equipment. It features a clean-shaven, blue-eyed Australian moving about in a pristine neo-natal ward, promising new recruits that they will be helping Muslims who suffer from “a lack of qualified medical care.” The video has the feel of a daytime television public-service message.

In an exchange on jihadi radio station Ask.fm the same week, a person identifying himself as a British resident of ISIS territories promised newcomers free medical school with minimal entry requirements.

Meanwhile, in a series of tweets, another person purporting to be a Briton praises subsidized gas, free water and dental care superior to anything offered in the West.

“Naturally the arrogance will kick in & they would deny the truth and claim there (sic) way is better. Lol next time you pay your bill smile,” the person said, according to a selection of tweets culled by the SITE Intelligence Group.

A handful of people show up repeatedly as key recruiters: a Glasgow woman who reportedly helps British girls reach Syria; a Dutch fighter who gives jihadi interviews and set up a Tumblr page; a blue-eyed Frenchman who appears in multiple videos calling on his countrymen to emigrate to ISIS territories.

When Le Guen was arrested in April 2013, France’s defense minister said the government could “count on the fingers of one hand” those who, like him, wanted to fight alongside Islamic extremists. Now, the mass recruitment of Western Islamic radicals is considered one of the greatest security threats faced by Europe and the United States.

“They want Europeans in general. They want anyone to come, to fight, to create the Islamic state, to make the caliphate,” said Sebastien Pietrasanta, a French lawmaker who is spearheading nascent efforts to de-radicalize young extremist recruits. “We estimate there could be 5,000 and within the year, there could be 10,000. … We are facing not just a problem of security, but a problem of society.”

And the group isn’t just calling for weathered would-be fighters. As its new multimedia drive shows, anyone willing to help in the war zones of Syria and Iraq is welcome. One-way travel is encouraged, but not mandatory — at least, for men.

Anyone, from anywhere, can recruit for ISIS. A March study by Brookings Institute researchers J.M. Berger and Jonathon Morgan found more than 46,000 active Twitter accounts supporting Islamic State in a two-month period. As soon as one account is shut down, more emerge.

Meanwhile, Western government warnings about the dangers of joining ISIS have barely dented the rate of departures. Those who have lived unhappily under ISIS rarely offer a competing narrative, in mortal fear of retaliation. And Western nations are having a hard time combatting rhetoric that they — and the Western media that ISIS so successfully mimics — are untrustworthy.

ISIS recruits skew young. In France, the West’s largest source of extremists heading to Iraq and Syria, they average in their mid-20s, with female recruits tending to be even younger.

Whatever they are looking for, ISIS promises: Shariah law, a deeper purpose in life, a fight against a dictator, aid work, automatic weapons, pathological violence for those so inclined.

The top U.S. military man in Europe attributes the success of ISIS recruiting to its understanding of what many young people yearn for, as well as the group’s ability to harness cutting-edge technology and personal connections.

Western recruits tend to cluster, like the 20-odd young men from the small French town of Lunel who left in groups of two or three and rejoined each other in Syria; the three British schoolgirls who followed months after the departure of a friend; or the group of young Spaniards accused of plotting attacks at home when they realized they would be blocked from going to Syria.

“They are able to reach and find out what is important to these people, what motivates these people, and then they create an ability to fill that need, initially through the social media, Internet,” Air Force Gen. Philip Breedlove, NATO’s supreme allied commander for Europe, said recently. “And then when they bring them on board, they continue to address these basic wants, of value, of a purpose — a sense of something as a part of a larger good. And whether it’s right, wrong or indifferent, they are able to reach into these people and find that motivation.”

Governments have failed at countering the tailor-made messages. John G. Horgan, of the University of Massachusetts’ Center for Terrorism and Security Studies, thinks it’s because Western intelligence agencies are looking at the caliber of recruits, instead of the sophisticated and enticing grooming process.

“It is phenomenally exciting for them to be part of this, this secret club,” Horgan said. “And once that takes root … that excitement completely outweighs anything we can do to try to counter it.”

An e-book of travel advice feeds on the excitement, advising people to bring military-grade knives, a compass and solar chargers because “you will be minimizing wastage and polluting less.” It recommends bringing an extra set of clothes for changing after the dash under barbed wire.

Few who have abandoned life under Islamic State are willing to talk about it, although security officials say about a third of European fighters have returned home.

The group threatens traitors with death and has carried out that threat in Syria, if not in the West. But Peter Neumann of the International Centre for the Study of Radicalisation and Political Violence at Kings College London says their voices will ultimately be the most effective at dissuading more departures, if governments can ensure they face no risk.

“Right now it’s really only ISIS who is telling a story,” he said. “To have a counter-story being told by a former fighter would be potentially very powerful.”

There will be no counter-story from the young man from Belgium who joined ISIS after becoming convinced that his Arab name torpedoed any future in his homeland.

The man’s mother said she found him a few small jobs and tried to convince him that his place was in Belgium — “that he had a future … that jihad was to have the courage to look every day for work.” She spoke to The AP on condition of anonymity for fear of what might happen to her government job if it became known that she had raised an Islamic extremist.

The people the young man met hanging around Brussels-area mosques, coupled with the videos he saw online, had a more alluring pitch.

“They told him he could help people in Syria,” the mother said. In a phone call home, he told her of his intention of building the caliphate and dying as a martyr. At age 19, Anis, also known as Abu Ibarhim al-Belgiki, was reported killed on the last day of February in the battle for Deir al-Zour airport in Syria.

His mother was told he was hit in the head by a bullet — and buried near the spot where he fell.