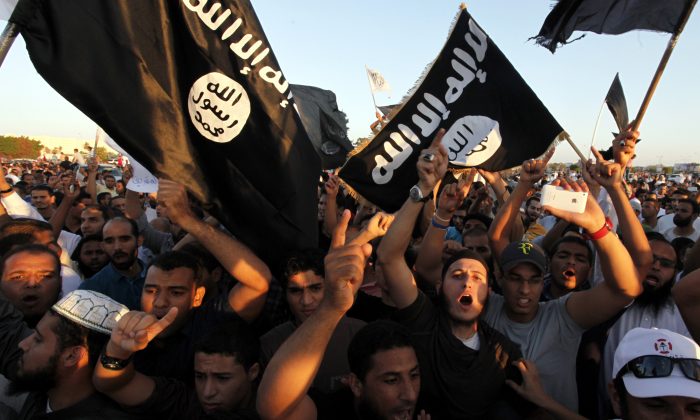 In this Sept. 21, 2012 file photo, Libyan followers of Ansar al-Shariah Brigades and other Islamic militias, hold a demonstration against a film and a cartoon denigrating the Prophet Muhammad in Benghazi, Libya. (AP Photo/Mohammad Hannon, File)
Middle East

ISIS’ Recent Moves in North Africa Are Freaking US Officials Out

There’s been much coverage of the Islamic State’s (ISIS) executions of foreign hostages, but some U.S. officials are more troubled about the terrorist organization’s moves in Libya.

Libya, along with Syria, were both swept up in the Arab Spring protests in 2011, which led to destabilizing civil wars.

And Libya hasn’t really recovered since then.

Several unnamed U.S. counter-terrorism officials told ABC News that ISIS is looking to expand and assert itself in Libya.

“I am becoming concerned with how quickly their new affiliates are getting organized,” one official told the broadcaster. The official added that ISIS “pretty much own[s] Libya,”

“We have zero collection there and zero authorities there,” the official stated.

The U.S. is still having difficulty in gathering intelligence or using its influence in Libya–which was long ruled by dictator Moammar Gadhafi–following the Sept. 11, 2012 attack on the consulate in Benghazi.

“They’ve been preparing this for a while. A lot of them fought with ISIS in Syria and they’re coming back home to Libya,” Aaron Zelin, with the Washington Institute for Near-East Policy, was quoted by ABC as saying.

And this view is shared by Libyan officials.

“We are seeing an exponential growth of ISIS in Libya,” Aref Ali Nayed, who serves as Libya’s ambassador to the United Arab Emirates, told Bloomberg News. “Libya, because of its resources, has become the ATM machine, the gas station, and the airport for ISIS. There is an unfortunate state of denial about all of this, and that is the most dangerous thing.”

“What happened in France is just a sign of things to come,” he added. “It makes no sense to do this in compartments. You cannot have a consortium that is bombing ISIS in Syria and Iraq and not doing so in Libya.”

“IS is growing in Libya, exponentially. IS is committing atrocities every day,” he said. “It’s not possible to fight ISIS in Iraq and Syria without also addressing the Libyan component.”

The Libyan militant group, Ansar al-Sharia, was blacklisted by the United Nations, because it has ties with ISIS. Nayed said the group has probably changed its name to maintain its ties with ISIS.

He added that Libya could also be used as a launching point for attacks on Europe, as Libya is “only an hour away.”