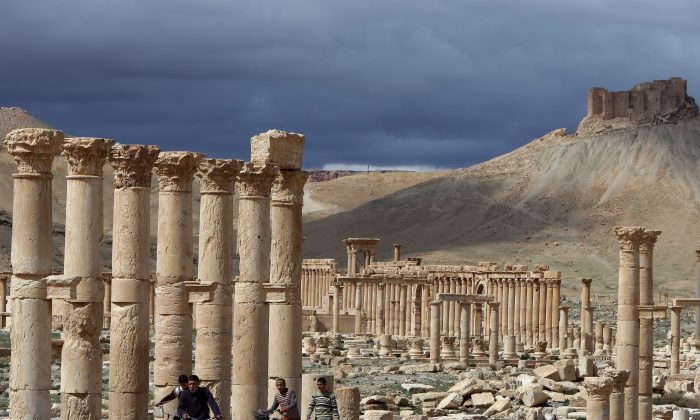 ISIS Rampage: A Threat to Cultural Heritage That Belongs to All

LOS ANGELES—Warfare has always put cultural heritage into harm’s way, but the threats of today’s armed conflicts are without precedent in the modern era. The breakup of Syria into separate enclaves of influence and governance has put at risk the United Nations’ regime for protecting cultural heritage. The systematic and planned destruction of millennia-old antiquities by the Islamic State (ISIS) in Syria and Iraq has made the task of the United Nations more difficult. It is time to consider concrete measures as to how to safeguard the artistic legacy of our ancient past.

Individual nations have struggled to find a way to stop ISIS pillaging Iraq and Syria. President Barack Obama announced his decision to send 50 special operations troops to Northern Syria as part of the broader campaign against ISIS. The U.S. effort focuses on advising and training Syrian Arab and Kurdish forces while Russia is aiming its military might in support of the Assad regime.

Richard Haas, president of the Council on Foreign Relations, has described this strategy not as the beginning of an effort to restore Syria as a country, but as accepting that Syria is already a multi-enclave geographic entity comprising separate enclaves controlled by the Syrian government, ISIS, Nusra Front, and the Kurds.

ISIS vigorously not only opposes the modern states of Iraq and Syria, the borders of which date back to a “Sykes-Picot conspiracy,” as ISIS calls it, but it also doesn’t recognize nation-states as such. ISIS knows no national borders. It is a geographic entity of ideology and enforced obedience, whereas Patrick Cockburn quotes in his new book “The Rise of the Islamic State: ISIS and the New Sunni Revolution,” “the Arab and non-Arab, the white man and black man, the easterner and westerner are all brothers … Syria is not for Syrians and Iraq is not for the Iraqis. The Earth is Allah’s.”

This complicates the international community’s response to ISIS’s assault on the region’s cultural heritage.

The international community has effectively outsourced the protection of cultural heritage to nation-states.

The international community has effectively outsourced the protection of cultural heritage to nation-states. As UNESCO declared in its 1970 Convention on cultural property, “It is incumbent upon every state to protect the cultural property existing within its territory against the dangers of theft, clandestine excavation, and illicit export” and that “the protection of cultural heritage can be effective only if organized both nationally and internationally among states working in close cooperation.”

But what if, as is increasingly obvious with regard to Iraq and Syria, nation-states are incapable of protecting the cultural heritage within their borders? Sadly, the international community has very little recourse.

As Michael Glennon has written in his 2010 book “The Fog of Law: Pragmatism, Security, and International Law,” “The international legal system cannot compel a state to subscribe to a rule unless it consents to do so. It cannot adjudicate the application of a rule to a state unless the state has accepted the jurisdiction of the tribunal to apply the rule. It cannot enforce a rule against a state unless the state has consented to the rule’s enforcement.” States can defend themselves. On these terms, the international community struggled over crossing the borders of Syria and Iraq without the consent of those states.

Some enforcement measures only result in keeping endangered cultural heritage in harm’s way.

The United Nations has worked to persuade Syria and Iraq to close its borders to illicit trade in cultural heritage with the hope that such measures will prohibit such trade and the destruction to cultural heritage. But given the insecurity of Syrian and Iraqi state borders, it’s unlikely that such border controls can be enforced while hundreds of thousands of citizens flee the country for safety. And even if Iraq and Syria could enforce such restrictions, the measures would only result in keeping endangered cultural heritage within the state’s borders and in harm’s way.

The United Nations has also asked foreign nations to prohibit the importation of non-provenanced and likely illicitly excavated heritage items from crossing their borders. Instead, nations are encouraged to send confiscated items back to Syria and Iraq, again, most often into harm’s way.

To protect cultural heritage already improperly removed from Syria and Iraq, the international community, either state by state or by mandate from the United Nations, should encourage the creation of “safe havens” outside Syria and Iraq as temporary custodians for the safekeeping of endangered cultural property. To date, only France has proposed the creation of such safe havens.

Yet this is precisely what the United Nations does for the protection of refugees. The U.N. High Commissioner on Refugees pledges protection by ensuring that they will “not be returned involuntarily to a country where they face persecution.” Instead, it helps them find “appropriate durable solutions to their plight, by repatriating them voluntarily to their homeland, integrating them in countries of asylum, or resettling them in third countries.” Such a protocol could also be considered the proper and moral strategy for threatened, looted, and confiscated cultural heritage.

A third option is to send U.N. Blue Helmet forces into the region to protect cultural heritage, both portable and built heritage. Such forces, we should remember, comprise military forces contributed to U.N. operations by national armies. They remain, in the language of the United Nations, “first and foremost members of their own national armies” and are only seconded to work with the United Nations.

The world must rethink how to overcome the obstacles in relying on nation-states to protect cultural heritage.

To date, Blue Helmet forces monitor disputed borders, observe peace processes in post-conflict areas, provide security across a conflict zone, assist in-country military personnel with training and support, assist ex-combatants in implementing peace agreements, and are deployed by the authority of the U.N. Security Council. Given the current difference of opinion between the United States and Russia on governance in Syria, and given that the United States and Russia have veto power within the U.N. Security Council, it is difficult to imagine Blue Helmets being sent into the region to protect cultural heritage.

Deteriorating security in Syria and Iraq, and the tenacity and complexity of ISIS, requires a multilateral response from the international community, and a rethinking of how it can overcome the inherent limitations and obstacles of the nation-state-based regime for the protection of cultural heritage.

If the heritage destroyed and under threat by ISIS “belongs to all Syrians and all humanity,” as UNESCO Director-General Irina Bokova has claimed it, the international community must find a way to overcome the limitations imposed on cultural heritage by the United Nations.

James Cuno is president and CEO of the J. Paul Getty Trust. Copyright © 2015 YaleGlobal and the MacMillan Center. This article was previously published on Yaleglobal.yale.edu