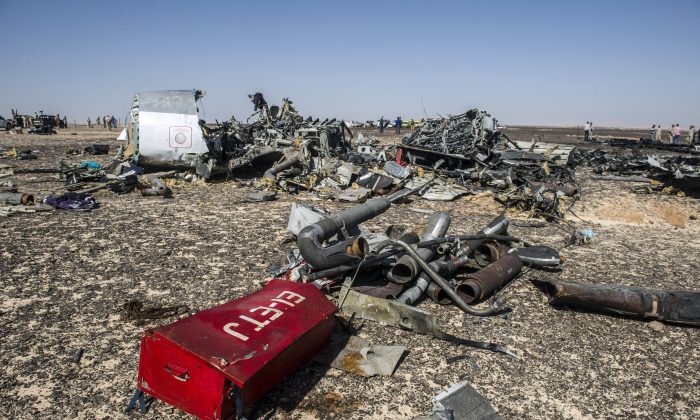 Debris belonging to the A321 Russian airliner are seen at the site of the crash in Wadi al-Zolomat, Egypt's Sinai Peninsula, on Nov. 1, 2015. The incident has triggered conspiracy theories. (Khaled Desouki/AFP/Getty Images)
Europe

Across Twitter and Facebook, a video purportedly showing the downing of a plane is being heavily circulated after  Kogalymavia Flight 9268 crashed in Egypt’s Sinai Peninsula on Saturday morning.

The grainy footage shows a plane flying overhead before the plane explodes and starts to plummet. The video includes imagery and music typical of Islamic State (ISIS) propaganda videos. Later, some media reports questioned whether the terrorist organization was behind the crash.

However, many experts said the video footage is likely fake.

A reporter based in Cairo, Samer al-Atrush, said ISIS in Sinai denied that it released the video. The group said the “purported vid of Russian plane being down is a fake,” according to Atrush.

The footage can be seen below (viewer discretion is advised):

Nonetheless, an offshoot of ISIS based in Sinai claimed responsibility for the plane crash, and the group’s assertion was denied Russian and Egyptian officials. ISIS said the plane was shot down in “response to Russian airstrikes that killed hundreds of Muslims on Syrian land.”

Later, a statement that was purportedly from ISIS along with a photo of a smiling militant holding a rocket launcher was also circulated on Twitter. Next to the smiling militant photo, an English statement said it was a “good day” to shoot down a Russian jet.

Charles Lister, a Middle East analyst with the Brookings Institute, wrote that ISIS probably wasn’t behind the plane crash.

“PT: (3) is least likely (#Egypt not known to have lost AD/SAM systems). Option (2) is feasible, but #ISIS has history of (1) – Bardo Museum,” he also wrote. “The most advanced anti-air weapon #ISIS has is SA-18 Igla MANPADS, which can reach 10,000ft – way below altitude of #Russia airliner,” Lister later stated.

A Russian official said the plane broke up in the air.

“The destruction happened in the air, and fragments were scattered over a large area of around 20 square kilometers,” said Viktor Sorochenko, the head of the Intergovernmental Aviation Committee. “It’s too early to talk about conclusions,” he told a Russian TV broadcaster from Cairo, according to Reuters.

Egyptian President Abdel Fattah al-Sisi on Sunday said it might take months to figure out the truth behind the crash.

“This is a complicated matter and requires advanced technologies and broad investigations that could take months,” Sisi said on TV.

A Russian TV channel reported that a pilot on board the plane expressed worry about the Airbus A321. Natalya Trukhacheva, who was identified as the wife of co-pilot Sergei Trukhachev, was quoted as saying he complained before the flight “that the technical condition of the aircraft left much to be desired,” according to The Guardian.

The plane took off at around 5:51 a.m. local time on Saturday and disappeared 23 minutes later, Egypt’s civil aviation ministry stated. It had 224 people on board. Officials said everyone on the plane died.