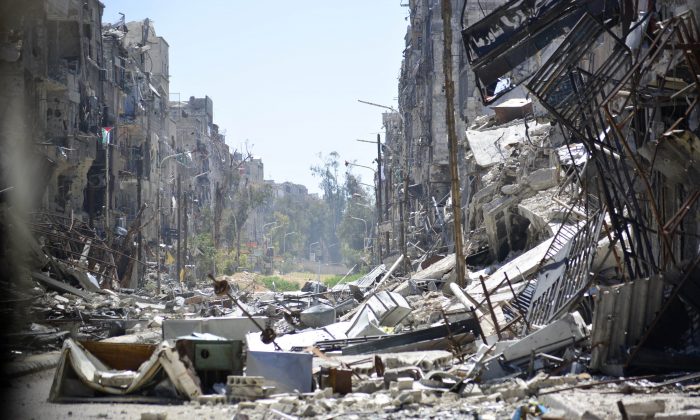 Despite ISIS’s recent gains near Syria’s capital, Damascus, it has been dealt a series of blows in recent days.

Sources said the terrorist group lost “at least three large oil fields” in Iraq—one of the group’s main sources of income—and it’s left with just one field in the country, according to a report from Sueddeutsche Zeitung, citing Germany’s BND Intelligence Service.

The report said ISIS only has “five percent” of its previous oil extraction capabilities.

The group now controls the Qayara oil field, which has an output capacity of only 2,000 barrels a day.

This is a far cry from the heyday of ISIS’s oil production in the summer of 2014, when the group was said to be producing 80,000 barrels of oil and generating $3 million per day in sales, according to Foreign Policy magazine.

But this probably isn’t going to stop ISIS any time soon, as the terrorist group has a number of different avenues in which to make money: Smuggling, high taxes on local businesses, ransom demands, and even drug trafficking.

And the United States knows this fact well. Pentagon spokesman Rear Adm. John Kirby said a few weeks ago, “We know that oil revenue is no longer the lead source of [the ISIS’s] income in dollars.” He added, “They also have a significant black market program going on,” without elaborating, according to the Defense Department’s website.

ISIS has also been receiving “donations” from wealthy individuals in certain regions, but it’s unclear who these people are.

The recent oil field losses took place amid the widespread Iraqi counteroffensive that resulted in the recapturing of Tikrit more than a week ago. A month ago, satellite images showed ISIS had set fire to two of the oil fields as Iraqi forces advanced, suggesting the terror organization has acknowledged they’re essentially a lost cause, according to the German report.

“For the BND, it is proof that [ISIS] itself does not believe in a speedy recapture (of the lost oil field and territory),” Sueddeutsche Zeitung wrote.

This, however, could deepen the humanitarian crisis in Syria because the lack of oil will lead to more water shortages and power outages in ISIS-controlled areas. Reports out of ISIS’s Syrian stronghold, Raqqa, suggest the city only has three to four hours of electricity and water per day.

This week, anti-ISIS activist group Raqqa is Being Slaughtered Silently posted photos of hundreds of people lining up to get food in Raqqa, suggesting the humanitarian situation there is poor.

The ISIS-controlled areas are one of “hunger, poverty, and homelessness,” wrote anti-ISIS activist Abu Ibrahim Raqqawi on Twitter.