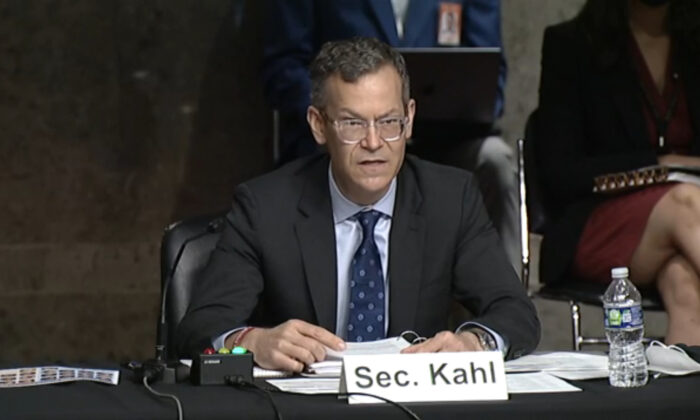 Colin Kahl, undersecretary of defense for policy, delivers testimony before the Senate Armed Services Committee in Washington on Oct. 26, 2021. (Senate Committee on Armed Services/Screenshot via The Epoch Times)
Afghanistan

ISIS-K, the branch of the ISIS terrorist group that’s active in Afghanistan, could be capable of launching international attacks in as soon as six to 12 months, according to a top Pentagon official.

In testimony to the Senate Armed Services Committee on Oct. 26, Defense Department Undersecretary for Policy Colin Kahl said that ISIS-K and the al-Qaeda terrorist group both want to carry out international attacks, but currently don’t have the capability to do so at present.

“I think the intelligence community assesses that both ISIS-K and al-Qaeda have the intent to conduct external operations, including against the United States. But neither currently has the capability to do so,” Kahl said. “We could see ISIS-K generate that capability in somewhere between six or 12 months. I think the current assessments by the Intelligence Community is that al-Qaeda would take a year or two to reconstitute that capability.”

Kahl said the goal was to “be vigilant in disrupting” ISIS and al-Qaeda, so they can’t develop the capability to attack the United States.

Lt. Gen. James J. Mingus, the Joint Staff’s director for operations, said the timeline is “based on no U.S. or coalition intervention.”

“The goal would be to keep those time horizons where they’re at now, if not, even further,” Mingus told the committee.

The Taliban terrorist organization took full control of Afghanistan on Aug. 15, after the U.S.-backed Afghan government fled the country.

“It is our assessment that the Taliban and ISIS-K are mortal enemies,” Kahl told lawmakers. “So the Taliban is highly motivated to go after ISIS-K.”

Kahl said it’s still unclear whether the Taliban has the ability to fight ISIS effectively in the wake of the U.S. withdrawal.

“Their [The Taliban’s] ability to do so, I think, is to be determined,” he said.

He estimated that ISIS has a “cadre of a few thousand” fighters. Acting Foreign Minister Amir Khan Muttaqi of the new Taliban government said the threat from ISIS terrorists will be addressed and that Afghanistan wouldn’t become a base for attacks on other countries.

“We have seen signs … that the Taliban is wary about Afghanistan being a springboard for al-Qaeda external attacks, not because the Taliban are good guys, but because they fear international retribution if that were to occur,” Kahl said.

The United States has fought the Taliban and has conducted strikes on ISIS and al-Qaeda.

Read More
What Is the Real Threat From al-Qaeda and ISIS in Afghanistan? Terrorism Analyst Bill Roggio on Why Afghanistan Fell
Afghanistan Is ‘A Massive Safe-Haven for Al Qaeda, ISIS’—Feat. Marine Corps Veteran Elliot Ackerman