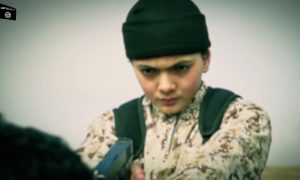 A fighter from ISIS takes position in a destroyed in Damascus, Syria, on Sept. 22, 2014. (Rami Al-Sayed/AFP/Getty Images)
Middle East

The ISIS terrorist group has lost about 25 percent of its territory inside of Iraq and Syria, according to a recent U.S. assessment

It comes after Iraqi, Kurdish, and U.S.-led forces attacked the group in Tikrit, located in northern Iraq.

“We assess ISIL’s front lines have been pushed back in northern and central Iraq,” Pentagon spokesman Col. Steve Warren said last week, referring to another name for ISIS. “ISIL no longer has complete freedom of movement in roughly 25 percent of populated areas of Iraqi territory where they once operated freely,” he said, according to ABC News.

“Their caliphate is in the process of shrinking,” Warren said.

CIA Director John Brennan, in an interview with the Council on Foreign Relations on Friday, said ISIS won’t last because it can’t govern properly.

“I do think the great image of ISIL, in terms of its being able to prevail and be successful inside Iraq and Syria is being pierced,” Brennan said. “We see that they are having setbacks, we see that there is some dissention in the ranks. We see that a lot of the requirements that are attendant to having control of territory and having the responsibility to run it administratively is not really the strong suit of these thugs who are joining this band wagon.”

But outside of Iraq and Syria, more trouble could be brewing.

Nigeria’s Boko Haram, a group that has claimed responsibility for hundreds of killings and kidnappings in northern Nigeria, pledged allegiance to ISIS, and ISIS accepted the group’s pledge last week.

“We give you glad tidings today about the expansion of the Caliphate to West Africa, for the Caliph, may Allah preserve him, accepted the pledge of allegiance of our brothers in Jama’at Ahl al-Sunnah Lil Dawa Wal Jihad [Boko Haram],” Adnani said, according to the Long War Journal. “We congratulate the Muslims and our mujahideen brothers in West Africa for their pledge of allegiance, and we congratulate them for their joining the march of the Caliphate.”

And it appears the relationship between ISIS and Boko Haram goes a bit deeper.