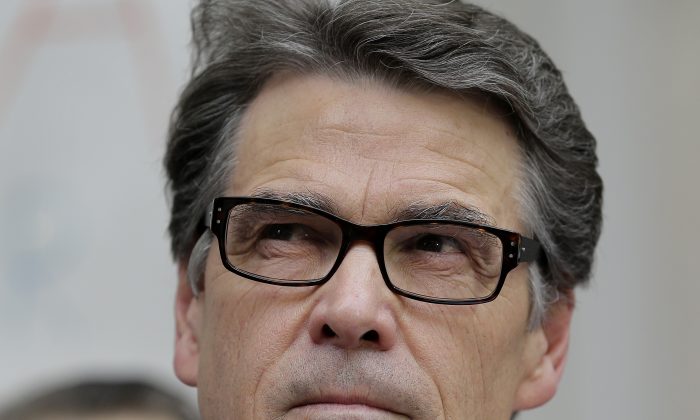 Texas Gov. Rick Perry talks with media and supporters at the Blackwell Thurman Criminal Justice Center after he was booked, Tuesday, Aug. 19, 2014, in Austin, Texas. Perry was indicted last week on charges of coercion and official oppression for publicly promising to veto $7.5 million for the state public integrity unit run. (AP Photo/Eric Gay)
US

Texas Gov. Rick Perry has said that members of the Islamic State, or ISIS, may have crossed the US-Mexico border and are in Texas.

“Certainly there a great concern that the border between the United States and Mexico is un-secure, and we don’t know who’s using that,” Perry said. “What I will share with you is that we’ve seen historic high levels of individuals from countries with terrorist ties over the course of the last months.”

He added: “There’s the obvious great concern that, because of the condition of the border from the standpoint of it not being secure and us not knowing who is penetrating across, that individuals from ISIS and other terrorist states could be — and I think there’s a very real possibility that they may have already used that.”

However, Perry said there’s no “clear evidence” of that.

Reactions to killing of journalist James Foley
James Foley was remembered on Wednesday as a journalist who was passionate, persistent, big-hearted, always pushing closer to the story. The 40-year-old went missing in northern Syria in November 2012, and his death was shown in a video that militants with the Islamic State group released Tuesday to international outrage. The news brought an outpouring of respect and sorrow from friends, colleagues and others who were struck by Foley’s pursuit of humanity in what he once called “these barren places.”

Here are some of their reactions.

“Jim was taken from us in an act of violence that shocks the conscience of the entire world. … All of us feel the ache of his absence. All of us mourn his loss. We keep in our prayers those other Americans who are separated from their families. We will do everything that we can to protect our people and the timeless values that we stand for.”

“The Associated Press is outraged by the killing of James Foley and condemns the taking of any journalist’s life. We believe those who kill journalists or hold them hostage should be brought to justice.

“Further, we believe the assassination of a journalist in wartime should be considered an international crime of war. The murder of a journalist with impunity is a threat to a free press and democracy around the world.”

“We ask our audience to consider refraining from watching or sharing the video of Jim’s killing or its associated images. The video is a graphic work of propaganda, intending to terrorize the public at the expense of an impartial, credentialed journalist whose objective was to chronicle the suffering in Syria, where more than 170,000 people have been killed.

“Jim cared deeply about the victims of war, and the rights of people living under oppressive regimes. He was an old-school reporter, who traveled light, talked to the locals and put the story first. His conflict reporting — from Afghanistan to Libya to Syria — exemplifies the intrepid and selfless work of someone willing to risk his life so the world could understand the horrors of modern war.”

Carol Giacomo wrote on Taking Note: The Editorial Page Editor’s Blog: “As Mr. Foley’s brutal beheading made clear, ISIS, a Sunni Muslim group, practices a perverted, nihilistic version of Islam that does an extreme disservice to millions of Muslims, both Sunnis and Shiites, pursuing more peaceful and purposeful lives.”

David Rohde, an investigative reporter for Reuters who was kidnapped by the Taliban and escaped, wrote in an opinion piece that Foley’s execution is “the clearest evidence yet of how vastly different responses to kidnappings by U.S. and European governments save European hostages but can doom the Americans. Hostages and their families realize this fully — even if the public does not.”

Rohde concluded: “A consistent response to kidnapping by the U.S. and Europe is desperately needed. The current haphazard approach is failing. James Foley must not die in vain.”

“The barbaric murder of journalist James Foley, kidnapped in Syria and held almost two years, sickens all decent people. Foley went to Syria to show the plight of the Syrian people, to bear witness to their fight, and in so doing to fight for press freedom,” said CPJ Chairman Sandra Mims Rowe. “Our hearts go out to his family, who had dedicated themselves to finding and freeing Jim.”