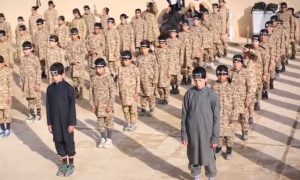 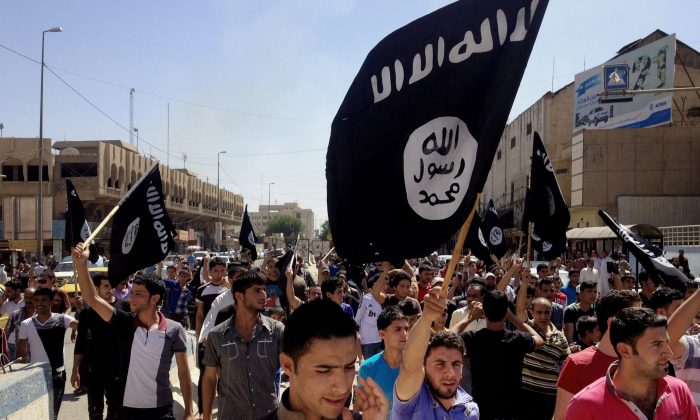 In this June 16, 2014 file photo, demonstrators chant pro-Islamic State group slogans as they carry the group's flags in front of the provincial government headquarters in Mosul. (AP Photo)
New York

Three Brooklyn men were arrested Wednesday for trying to join terrorist organization ISIS, or the Islamic State in Iraq and Syria. They were identified as Abdurasul Hasanovich Juraboev, Akhror Saidakhmetov and Abror Habibov, according to the FBI on Wednesday.

They will face charges of conspiracy to provide material support to terrorists. Each defendant faces a maximum of 15 years in prison if convicted.

All three defendants were arrested overnight. One at John F. Kennedy airport while attempting to board a flight to Turkey.

One defendant, Juraboev was also preparing to carry out a terror attack here in the United States

A different defendant, Saidakhmetov, expressed his intent to buy a machine gun and shoot police officers and FBI agents

They had expressed support online for the establishment of an Islamic caliphate. Juraboev and Saidakhmetov also were trying to go to Turkey before going to join and fight for ISIS in Syria.

Saidakhmetov was taken into custody on Wednesday at JFK International Airport. Saidakhmetov was also looking to purchase an assault rifle to kill FBI agents and police officers if he couldn’t join ISIS.

Juraboev also said he wanted to kill President Barack Obama if ISIS leaders told him to. “I am in USA now … But is it possible to commit ourselves as dedicated martyrs anyway while here? What I’m saying is, to shoot Obama and then get shot ourselves, will it do? That will strike fear in the hearts of infidels,” he said, according to the complaint filed in the United States District Court Eastern District of New York.

“We will vigorously prosecute those who attempt to travel to Syria to wage violent jihad on behalf of ISIL and those who support them,” said U.S. Attorney Loretta Lynch. “Anyone who threatens our citizens and our allies, here or abroad, will face the full force of American justice.”

“ISIL calls on its followers to come fight for the terrorist organization in Syria, and in messages to followers outside Syria, ISIL has called on them to attack police, intelligence officers or the military in their home countries including the United States,” said NYPD Commissioner Bill Bratton in a statement. “By pledging allegiance to ISIL, these defendants conspired to fight for a designated foreign terrorist organization either in Syria, or even New York.”

“The defendants looked to join the Islamic State of Iraq and the Levant, by flying to Turkey in a vain attempt to evade detection. And several of the defendants planned to commit acts of terror here—in America—if they could not travel, to include killing FBI agents. The defendants violated the true tenants of their faith in pursuit of their radical, violent agenda,” statted FBI Assistant Director in Charge Diego Rodriguez. “We rely on help from the community, the public and religious leaders to be mindful of those who could be radicalized. We cannot do this alone.”