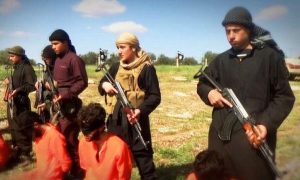 Palestinian Refugee Camp a Critical Battle for ISIS in Syria

The recent surge of fighting in Syria has now spread to a seemingly unlikely—yet critical—place: A refugee camp.

ISIS, known as the Islamic State in Iraq and Syria, has been engaging in fierce battles with other extremists groups and Syrian regime forces in Yarmouk, a massive Palestinian refugee camp in Damascus, according to the U.K.-based Syrian Observatory for Human Rights, a group that monitors fighting in Syria. It said about “20 barrel bombs” were dropped by regime warplanes into the camp.

The Observatory said that ISIS was in control of about 90 percent of the camp, but it appears that fighting is still ongoing. A YouTube video uploaded Sunday shows ISIS fighters in the refugee camp, shouting the typical “Allahu Akbar” and “Takbir” war cries as they advance.

It may just be a refugee camp, but if ISIS is able to keep its grasp on Yarmouk—formerly a suburb of Damascus with 150,000 Palestinian refugees but only has a fraction of that number now—it could spell dire consequences for the Syrian regime. The suburb is only a few miles south from Syrian President Bashar al-Assad’s stronghold in Damascus, and it is the farthest ISIS has reached into Syrian regime-held areas.

Last week, a journalist and activist in the area, who declined to give his real name, said ISIS is basically in control of the refugee camp now. “Gun battles between IS fighters and a Palestinian armed group called Aknaf Beit al Maqdis ensued, while the Syrian government bombed the camp with mortar shells from above,” he told Middle East Eye, essentially confirming what the Observatory reported.

The journalist, who only said his name was Ahmad, also described what southern Damascus is like. Even amid shelling by regime forces, terroists like ISIS are able to go from neighborhood to neighborhood, saying it’s like “moving from island to island,” he said.

“This is what southern Damascus is like. The Islamic State is now in Hajar al-Aswad but they can easily transfer fighters to other areas,” he said, referring to another name for ISIS.

The development doesn’t bode well for Damascus, which has suffered a series of setbacks in different areas, including in Idlib, located in northwestern Syria. The Syrian terrorist group affiliated with al-Qaeda, al-Nusra Front (also known as Jubat al-Nusra), took the city last week.

And while ISIS and a number of other terrorist groups in the area are at odds with one another, Ahmad suggests that Assad’s regime is still the priority target in the refugee camp.

In Yarmouk, he observed that “two weeks ago al-Nusra was in a battle with elements of the [Free Syrian Army] and [ISIS] did not intervene. When there is infighting between rebel groups, the others don’t take sides.”

However, Ahmad’s later comments suggest the situation on the ground is more chaos than anything else.

“Rebel groups are fighting each other instead of fighting the regime, who shell us every day. … We don’t know what the aim of the rebels is anymore … is it to control the camp, defeat the regime? Get rid of another rebel group?” he asked.