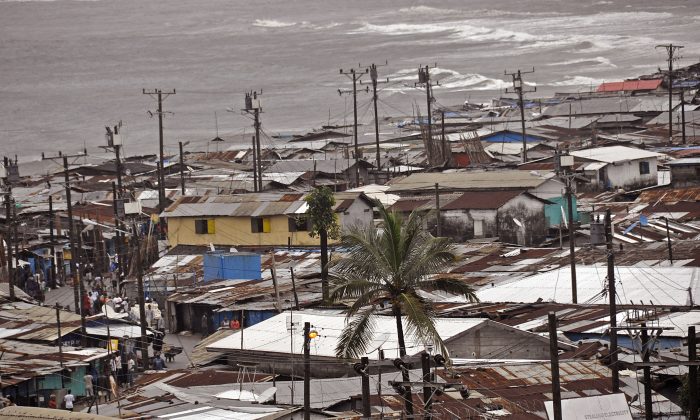 West Point, one of the areas were the Ebola virus has claimed lives in Monrovia, Liberia, Thursday, Aug. 21, 2014. Calm returned Thursday to a slum in the Liberian capital that was sealed off in the government's attempt to halt the spread of Ebola, a day after clashes erupted between residents and security forces, but now the tens of thousands of residents are worried about getting food. (AP Photo/Abbas Dulleh)
Ebola

A new conspiracy theory ties ISIS, or the Islamic State, to the Ebola outbreak in West Africa–somehow.

A viral article from Before it’s News is claiming that an ex-police officer, Greg Evensen, said the group ” now has the weaponized ebola virus, here in America!” He claims the group has sleeper cells in the US to make that happen.

It adds: “Warning that there are no rules left, the plan that is now unfolding is an attempt by ISIS to completely disrupt whatever semblance of government is now left in the United States. Evensen joins Hawk shortly after the 1 minute 45 second mark in this bombshell show.”

It then says that Evensen got the information “from his inside sources.”

However, no mainstream or local media reports in the US have reported on anything that indicates ISIS has “weaponized Ebola.”

A number of users on social media sites panned the Before it’s News report as merely making stuff up to get clicks.

A report from earlier this month says that it would be very difficult to make Ebola into a bio-weapon. However, Peter Walsh, a biological anthropologist at Cambridge University, told CBS News that world powers should take the potential of an Ebola bomb threat seriously.

Terrorists, he said, could “harness the virus as a powder” and put it into a bomb. “It could cause a large number of horrific deaths,” Walsh added.

But Dr. Robert Leggiadro, a physician in New York who also has done work in researching bio-terrorism, said that Ebola would be hard to make into a weapon.

“The thing about Ebola is that it’s not easy to work with,” Leggiadro was quoted as saying. “It would be difficult to weaponize.”

“The chance of the Zaire strain of Ebola being made into a biological weapon is less than nil,” he said. “It’s just not going to happen.”